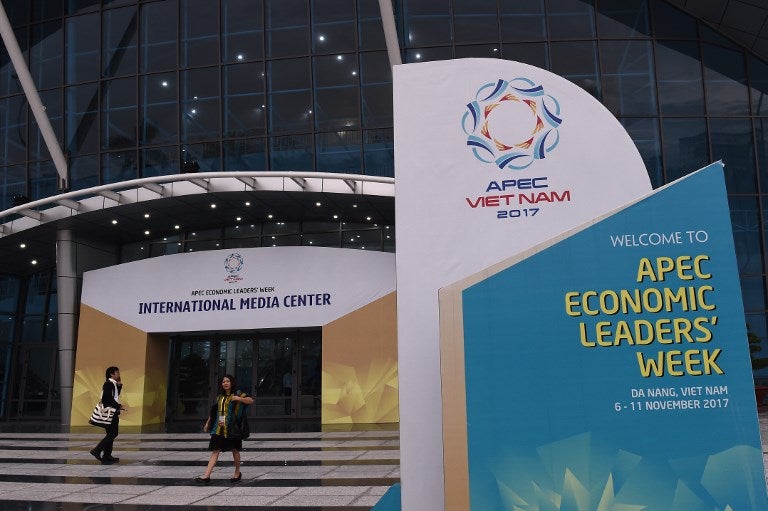 People walk outside the media centre ahead of the Asia-Pacific Economic Cooperation (APEC) Summit in the central Vietnamese city of Danang on November 7, 2017.
Leaders from the 21-member APEC organisation will meet in Danang November 11-12. / AFP PHOTO / LILLIAN SUWANRUMPHA

Leaders of 21 economies in Asia and the Pacific yesterday expressed their strong commitment to the multilateral trade system in the digital age and anti-protectionism, but also recognized the importance of bilateral agreements as strongly pushed by the United States.

“The Bogor Goals of free and open trade and investment, and the support for the multilateral trading system as well as the growth of connectivity strategies and programmes have provided long-term orientations for Apec’s activities and afforded hundreds of concrete cooperation areas,” said Vietnam’s President, Tran Dai Quang, chair of the meeting.

Members of the Asia Pacific Economic Cooperation (Apec) gathered in Vietnam’s central city of Danang to champion the multilateral trading system and liberalisation amid changes in the global situation after one of its major members, the US, shifted its policy to focus on bilateralism.

In the declaration issued yesterday the leaders said they “recommit to fight protectionism, including all unfair trade practices, recognising the role of legitimate trade defence instruments”.

The statement is a compromise between the US’s demand to promote bilateral economic cooperation and the majority of Apec members who champion a multilateral trade framework at the core of cooperation among the economies.President Donald Trump, who attended the Apec summit for the first time this year, has pushed his “America First” policy and earlier withdrew from the Trans-Pacific Partnership (TPP), which Washington had strongly pushed.

The remaining 11 members of the TPP held a meeting on the sidelines of the Apec in Danang and told a press conference yesterday that they had finally agreed to go ahead without the US, by suspending 20 provisions from the original deal.Japan and Singapore are the most active members of the TPP. Japan’s Economy Minister Toshimitsu Motegi said that the CPTPP would go into force after six of the 11 nations ratify it.

“We recall our pledge to extend our standstill commitment until the end of 2020 and recommit to fight protectionism, including all unfair trade practices, recognising the role of legitimate trade defence instruments,” the statement said.Thai Prime Minister Prayut Chan-o-cha said Apec should keep its faith in free trade amid the growing trend of protectionism and anti-globalisation.

The world is keeping a close eye on free trade pacts in the Asia and Pacific, which is a great challenge for the region, he said. Thailand and other Apec members hoped to see progress at the 11th ministerial meeting in the World Trade Organisation, he said.

Apec has a framework on human resource development in the digital age as a guideline for all to develop their human resources in keeping with advancing technology.

The Asia Pacific region is one of the major food producers of the world. Countries in the region should utilise digital technology to develop productivity in the agriculture sector to ensure world food security, he said.The Thai government has applied HM the late King Bhumibol Adulyadej’s sufficiency economy philosophy, which is compatible with new technology, to move the agriculture sector in the country towards “smart farming”, Prayut told Apec leaders.

In order to support and enhance micro small and medium enterprises (MSMEs), Thailand has joined hands with Peru to push the Apec Strategy for Green Sustainable and Innovative MSMEs, he said.

As the Apec summit this year has approved the strategy, Thailand is ready to implement it, he said.Apec aims to become a low-carbon society and to generate jobs in the growing “green industry”, he said.Singapore’s Prime Minister Lee Hsien Loong said at the meeting that the government should play a key role in distributing the gains of globalisation and digitalisation.

While free markets and private enterprise are required to drive innovations that have opened up new frontiers for trade and commerce, efficient and fair economies are just as important, The Straits Times quoted Lee as saying.

Read Next
Women power in Asean, activate
EDITORS' PICK
IATF to LGUs: Issue ordinances vs attacks on frontliners, COVID-19 patients
Diokno to Duterte: OK to make fun of buck tooth, but focus on people’s needs first
10 Filipinos positive for COVID-19 in UK, 7 in Ireland — envoy
Nograles: Cabinet members to donate 75% of monthly salary to aid COVID-19 fight
Robredo spox thanks Duterte for defending VP’s efforts vs COVID-19
Quick chat with Nicole Andersson: ‘You really don’t need much to be happy’
MOST READ
Coronavirus hotbed Rizal to shut borders on April 6
ADB warns PH against prolonged lockdown
Sotto on Isko Moreno’s call: We do our job without the media following our every move
‘Money Heist,’ ‘Tales from the Loop,’ ‘Killing Eve,’ ‘Never Have I Ever,’ ‘After Life’: Five not-to-be missed series this April
Don't miss out on the latest news and information.