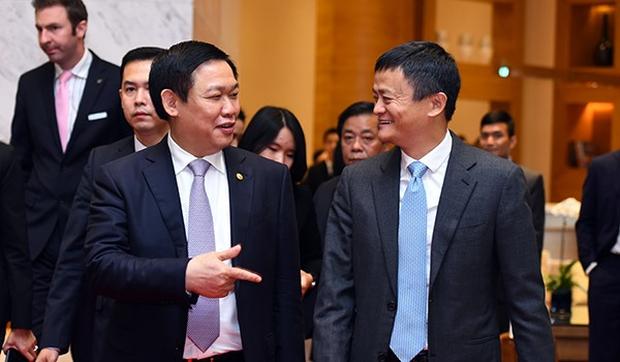 Addressing the Vietnam Electronic Payment Forum 2017 (VEPF) in the capital city, the Chinese tycoon said the rate of cash transactions in Vietnam was too high, despite the huge potential to develop e-commerce in the country, given its young and active population.

He said people keeping cash in their wallets increases chances of cheating, corruption and pickpocketing. If people don’t use wallets, the cutpurse will be jobless.

Instead of using cash, consumers can use mobile phones equipped with anthropometric technology, Ma said, adding that such transactions would be safe and any fraud easy to detect.

Deputy Prime Minister Vuong Dinh Hue said at the forum that in the context of globalization and integration, mobile payment was “an obvious trend” and that “no one wants to be left behind.”

It is a trend that can bring many benefits to the people, enterprises and the State, he said.

Hue said that implementing digital technology solutions has helped many countries in the world achieve breakthroughs in promoting financial inclusion, enabling people from all walks of life to access financial and banking services.

Hue said he agreed with the Alibaba chairman that mobile payment would also improve transparency in economic activities.

Vietnam will soon see an explosion in mobile payment, he predicted, saying the Government supported and was strongly committed to creating favourable conditions for mobile payment development in Vietnam. This would help, in part, to reach the target of reducing cash transactions to below 10 per cent by 2020, he said.

According to the Payment Department of the State Bank of Vietnam (SBV), Vietnam has good foundations to popularize the mobile payment method, thanks to easy availability of telecommunications services and the high rate of mobile phone use.

So far, there are 130 million mobile phone subscriptions in Vietnam, and 41.8 million of them use 3G to access the Internet. More than half the Vietnamese population uses smart phones, and their number is expected to increase to 80 million by 2020.

The department also notes that there are 41 commercial banks nationwide offering mobile payment services and their transaction value has been increasing strongly. In the first nine months of this year, there were 90 million mobile payment transactions worth 423 trillion dong ($18.8 billion), an increase of 93 per cent and 139 per cent, respectively, over 2016 figures.

Hue said that to address challenges in developing mobile payment, the Government will regularly hold dialogues with the business community as well as domestic and foreign financial institutions to figure out barriers and seek timely solutions.

The government will also complete a legal framework and build action programs to promote e-commerce application in general and mobile payment services in particular, he said.

The deputy prime minister asked ministries and other agencies to study the possibility of e-payment application in informal economic sectors. These sectors need to be better managed to avoid tax losses, he said.

SBV Deputy Governor Nguyen Kim Anh said that the central bank has been encouraging commercial banks to apply advanced technologies in banking operations in general and payment activities in particular.

This will expand consumers’ ability to access modern banking products and services, which will help improve the business efficiency and governance capacity of credit institutions, he said.

Anh also said that the SBV has established a steering board of financial technology (Fintech) development to give the Government advice on legal frameworks and facilitate the operation of Fintech businesses.

Can Van Luc, director of training with the Bank for Investment and Development of Vietnam, said that the Government needs to build a customer authentication infrastructure based on anthropometric data to support payment service providers in verifying customers’ information.

The VEPF, titled “Mobile Payment – A factor to promote non-cash economy,” was organized by e-newspaper VnExpress and the National Payment Corporation of Vietnam (NAPAS) under the leadership of the State Bank of Viet Nam.