Christmas in the metro

Filipinos are big on Christmas. It’s probably one of the most celebrated holidays that kick off as early as September or, in local parlance, the so-called “-ber months.”

Now that the Halloween decors are out, expect to see more of the bright, flashy lights, the colorful displays of tinsel, garlands, and the traditional parol (lanterns), as well as the “belen” and the Santas of varying shapes and sizes—all of which make for a highly festive atmosphere that Philippine Christmas celebrations are widely known for.

Over the years, some areas—be it a household or a mall—have become crowd favorites given their plush, ornate holiday displays, which have since provided sightseers the perfect Instagram post. Here are some of them.

The 700-meter street in Mandaluyong City has become an attraction every Christmas for its dazzling display of holiday decor using lights, lanterns, Santa figures and a majestic “belen” (Nativity scene).

The annual Christmas spectacle was started in 1996 by the Lim, Suva and Dalisay families mainly intended to bring about “community harmony.”

But it quickly gained popularity and attracted visitors from neighboring cities and even far-off provinces who wanted to see for themselves the well-adorned houses.

After two years, the houses’ elaborate Christmas displays led to the area being recognized by the Mandaluyong City government as a tourist attraction.

One of the houses appears like a giant, golden box. Lights follow the intricate outline of the house-from the gate all the way to the water tower. A twinkling star adorns its top, like the Star of Bethlehem.

According to reports, families shell out over P60,000 in power bills in December alone, more than twice the monthly average consumption.

At the peak of the street’s popularity from 2002 to 2008, the influx of visitors made it hard even for the residents themselves to go out of their houses. Businesses also took advantage of the sights as fast food giants and ambulant vendors set up shop in the area.

Busloads of visitors, however, left their garbage behind, while a number of people were victimized by pickpockets.

This prompted the majority of Policarpio residents decided to pull out of the project, leaving only the three original participants—the Suvas, Dalisays and the Lims.

The lit silhouettes of Rockwell buildings have welcomed every Rockwell resident and traffic-weary motorists every Christmas as the lights have been a signature image during holidays.

Padilla earlier said that “every Christmas, all of Rockwell Land’s developments transform into a magical spectacle that leaves almost everyone in awe.” 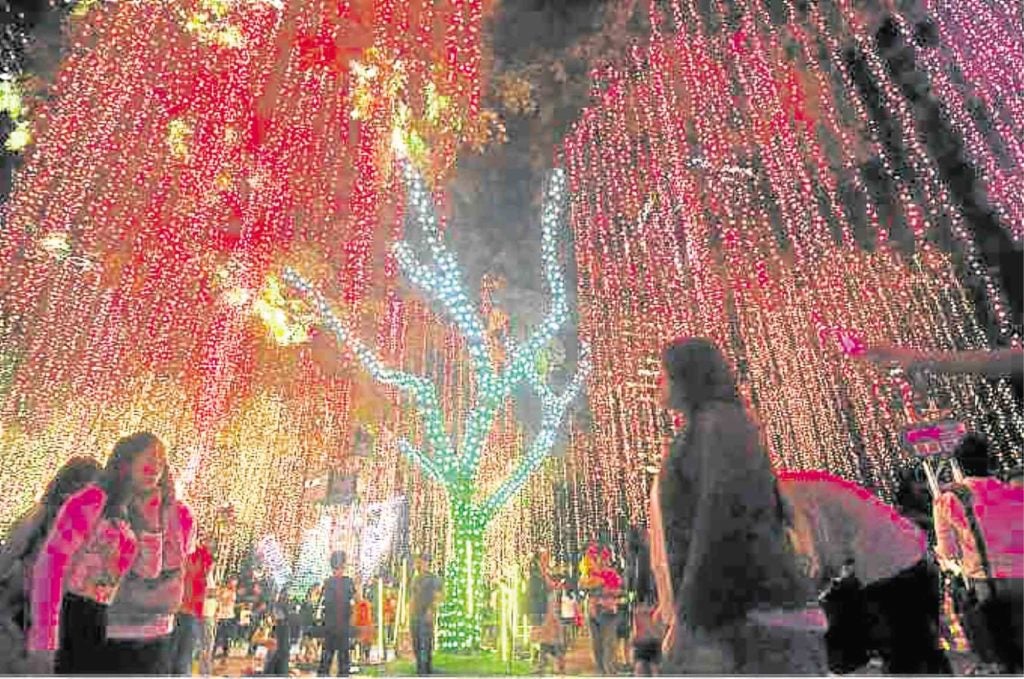 The 20,000-sqm garden becomes the venue of the annual lights-and-sounds show dubbed “Festival of Lights” every Chrismtas season.

About 1.6 million LED lights cascading from the trees flicker and change hues to the beat of the Christmas tunes played in the background.

The lights create patterns such as snowflakes, Christmas bells, Philippine lanterns and vivid colors that move in perfect synchronicity with the music and sound effects.

Last year, the spectacle made it to the Conde Nast Traveler’s annual list: “Where to See the World’s Best Christmas Lights.” It is in distinguished company such as the Tivoli Gardens in Copenhagen, Denmark; the holiday lights display at the legendary Champs-Elysées in Paris; and Japan’s Kobe Luminarie. 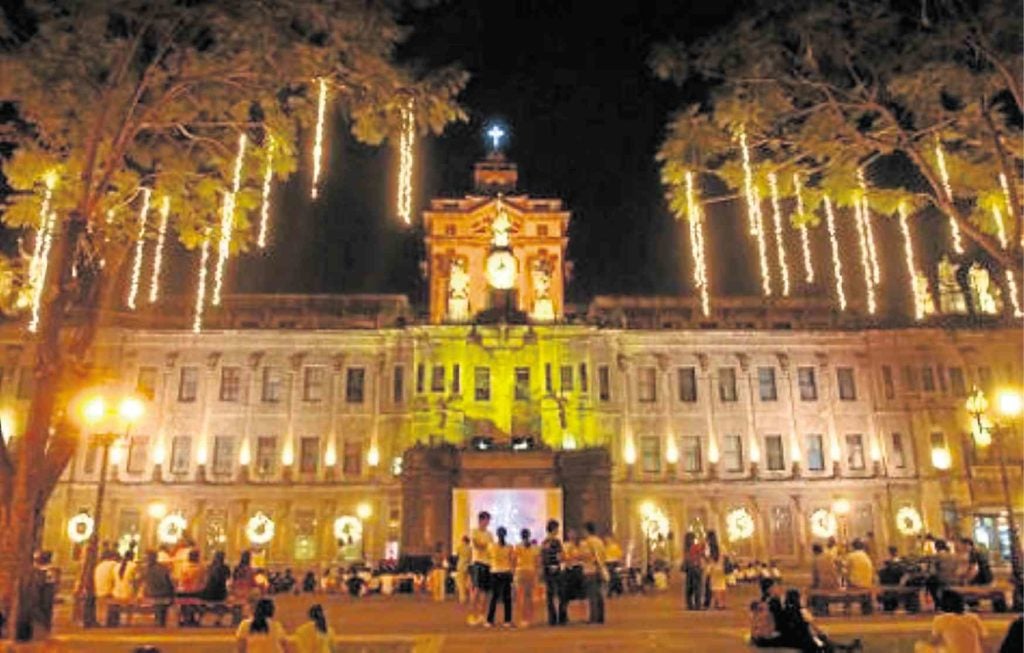 Paskuhan, usually held during the last school day of December, is the traditional Christmas celebration of the University of Santo Tomas.

Students, alumni, and even students from other universities troop to UST to enjoy the free concert, the bazaar, and the traditional fireworks display. The festivity also includes the lighting of the giant Christmas tree on the school’s football. Around the campus, trees are adorned with cascading lights.

In 2015, the Main Building, located at the heart of the campus, served as canvas for 3D mapping. The Paskuhan crowd was treated to a visual spectacle through a three-dimensional projection, showing delightful scenes such as the the Nativity and other Yuletide images.

Fashion businessman and landscape artist Rene Tiongco sets up in his house in Malate, Manila every December a miniature “Christmas village.”

The village is complete with snow-covered hills, quaint houses, children building snowmen and a choir tirelessly belting out “Hark! the Herald Angels Sing” in the town square.

It started in 1993 with only 10 small houses, a gift from his mother. Ir has since grown into a village with 60 structures, 500 little people, 200 animals and 300 pine trees laid out on an eight-meter platform spanning an entire wall and a two-meter stand in the living room.

Tiangco, who bought the mini houses during his travels abroad, earlier said that his fascination with the details of these structures and figures caters to his childlike fantasies.

He dreams of bringing his Christmas village, which takes two to four days to be set up, to a mall so he could share it with a bigger audience. But he is unable to do so because of security concerns.

There were proposals to put the miniature display outside but Tiangco was afraid it might get stolen or damaged. But he agreed to allowing students from neighboring St. Scholastica’s College to visit every Christmas.

Read Next
Addressing the battle cry of disabled persons
EDITORS' PICK
Rare earth metals at the heart of China’s rivalry with US, Europe
PNP, PDEA destroy P25.8M worth of marijuana in Kalinga
Kai Sotto continues to inspire Filipinos by sharing his passions and stories with Smart Prepaid
Alex Eala wins Grand Slam on Independence Day: ‘I hope I made my contribution to the country’
G7 rivals China with grand infrastructure plan
Ahead of ONE: Full Blast II, Mongkolpetch warns Elias Mahmoudi: ‘Watch out for my fists’
MOST READ
Groups slam Duterte ‘surrender’ to China
PH logs 7,302 new COVID-19 cases — DOH
1Sambayan names 6 choices to pit vs Duterte’s anointed in 2022
MVP steps into new role as top PLDT cheerleader
Don't miss out on the latest news and information.