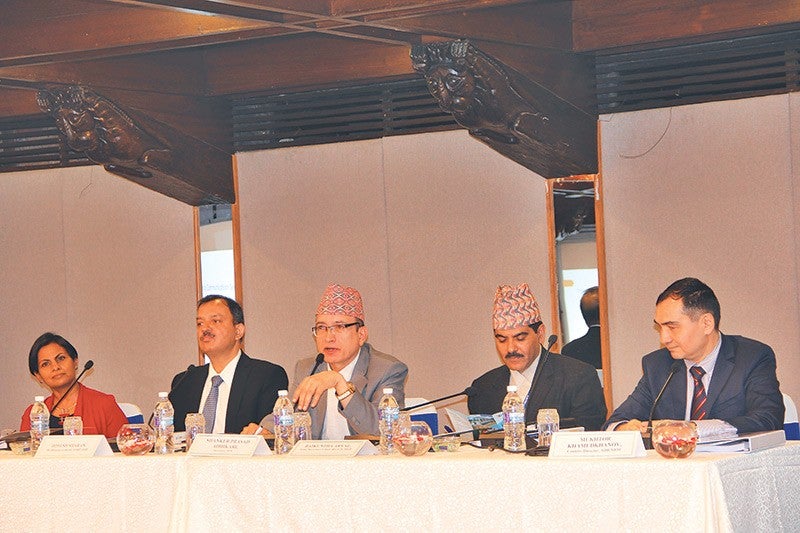 Nepal may not be able to repeat last year’s stellar performance in implementing projects funded by the Asian Development Bank (ADB), as the government has lagged behind in meeting fund disbursement and contract award targets so far in 2017. The Manila-based multilateral lending institution, which channels almost all of its funds to Nepal through the government, has set a target of disbursing $339 million to various projects in 2017. But as of September end, fund disbursement stood at $175 million, or around 52 percent of the annual target.

The ADB had also set a target of awarding project contracts of $533 million in 2017. But as of September end, contracts worth $259 million were awarded, which was around 49 percent of the annual target. These results of the third quarter of 2017 indicate the performance of ADB-funded projects will remain poor this year and the government will not be able to beat the record of 2016, when almost 90 per cent of the disbursement and contract award targets were met.

Tribhuvan International Airport, for instance, is extending its runway by 300 meters and building new 700-meter taxiway and terminal building through financial support of the ADB.  But so far the project has met performance target of only 17 percent.

Similar is the case with Gautam Buddha Airport, which should have been fully upgraded into an international airport by December 2017. But so far only 27 per cent of the works have been completed.

Another project bedevilled by delays is Melamchi Water Supply Project, which kicked off in 2000. The first phase of the project, under which around 170 million litres of water will be delivered to the Kathmandu Valley per day from the Melamchi River in Sindhupalchok, was supposed to be completed in 2007. But due to delays, the project completion deadlines have been continuously pushed back. Although it is now being said the first phase of the project would be completed before the end of 2017, possibilities of further delay cannot be ruled out as the contract of the Italian contractor hired to dig a crucial tunnel is expiring only in March 2018.

“The performance of these flagship projects suffered due to systematic problems as in the past,” ADB Deputy Director General Diwesh Sharan told the portfolio review meeting held in Kathmandu on Tuesday. Some of these problems, according to Sharan, are: transfer of key project officials, delay in approval process of land acquisition and environmental clearances, and weak implementation.