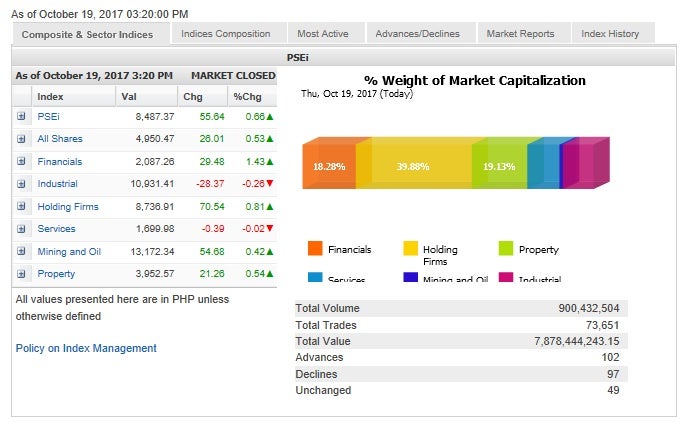 The benchmark Philippine Stock Exchange Index (PSEi) rose yesterday, recovering from the previous session’s decline, which came in the wake of a record close just under the 8,500 mark.

The gain yesterday underscored investors’ optimism after Bangko Sentral ng Pilipinas Governor Nestor Espenilla Jr. said he wanted to cut banks’ mandated reserves from 20 percent to “single digits.” This will increase liquidity, which has traditionally been a boon to the stock market.

As such, the PSE financial subsector led indices with a gain of 1.43 percent. This was followed by holding firms, up 0.81 percent, and property, up 0.54 percent. The industrial and services subindices fell by 0.26 percent and 0.02 percent, respectively.

A total of 900.4 million shares valued at P7.88 billion changed hands yesterday. Data from the PSE showed 102 gainers while 97 companies declined and another 49 closed unchanged.