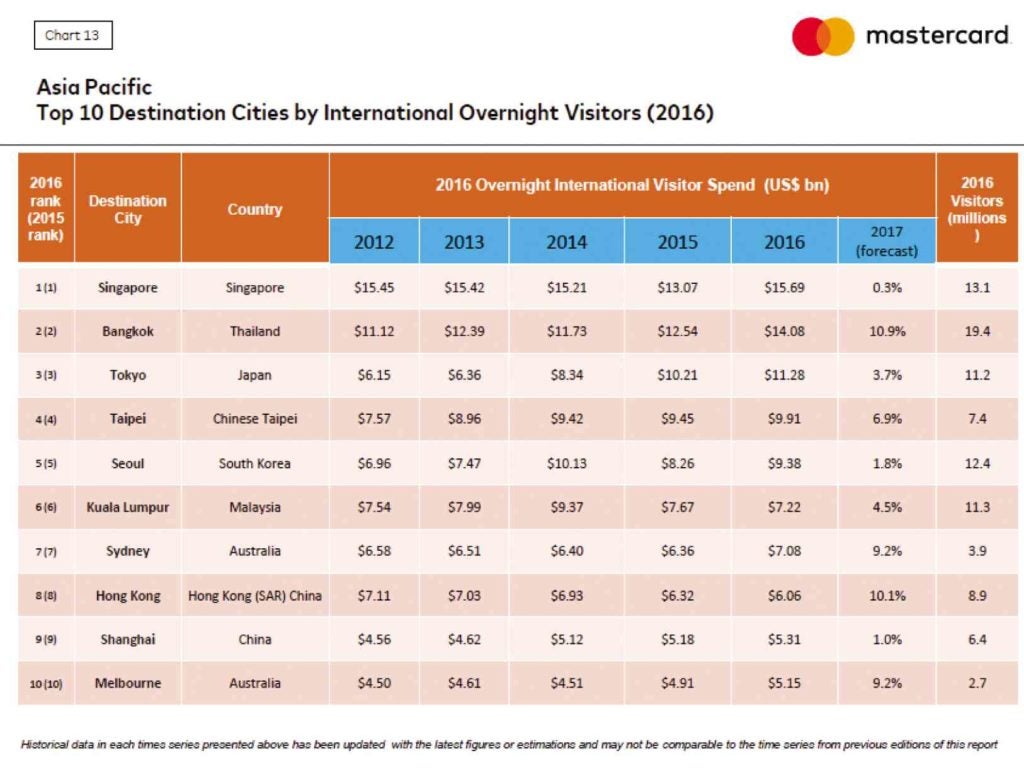 Spending of tourists in key cities in Asia Pacific reached $91.2 billion in 2016, edging out Europe, which raked in $74.7 billion in tourist expenditure, and North America, which generated some $55 billion.

Of the top 10 global destinations in 2016, five cities are from Asia-Pacific, led by Bangkok. And China was the top source of tourists in all five destinations, Schneider said.

Chinese tourists surpassed Indonesian arrivals in Singapore, as well as Koreans visitors in Tokyo for the first time in 2016, he said.

He noted that “Asia-Pacific is where the growth is happening” and that the significant growth in tourism and travel spending in Asia-Pacific outpaced that in the rest of the world.

The Global Destinations Cities Index showed that Bangkok remained the top tourist destination in 2016, with 19.4 million of visitor arrivals in the city. The number is slightly lower from the 19.6 tourists in 2015.

The same study broke down the kinds of “experiential spending” by tourists in the top Asian destinations.

Travellers in Kuala Lumpur spent most of their budget for leisure, while tourists in South Korea shell out more on shopping. Singapore tourists were drawn more to its dining experience.

With the rise of international tourism in the Asia-Pacific region, “governments and private stakeholders should continue to invest in smart networks and infrastructures that provide seamless experiences for tourists and residents,” Schneider said.

“But other rising economies, such as the Philippines, Indonesia and Vietnam have a lot of runway to grow their middle class and their outbound tourist spending,” Schneider said.