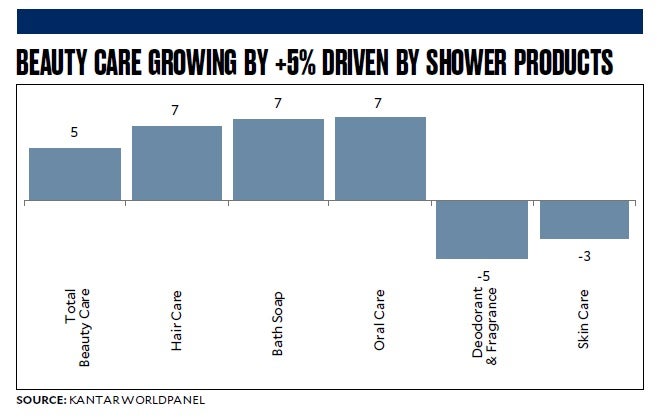 The next time you find yourself smushed by the crowd during your commute on the train, take comfort in the knowledge that your co-passenger most likely took the time to hop in the shower beforehand, as bath time, apparently, is a daily ritual sacred to many Filipinos—and it shows in their shopping habits, says a global consumer behavior research firm.

Through a study of in-home shopping behavior of 3,000 homes in both rural and urban areas in the country, Kantar Worldpanel discovered that three beauty care categories in the Philippines’ FMCG (fast-moving consumer goods) industry—hair care, bath soap, and oral care—contributed to a 5-percent increase in sales of the total beauty sector in 2016.

The study, however, also found that Pinoys’ bathroom regimen is becoming more complex, judging by the increase in spending on other products such as hair colorants (up by 22 percent in 2016 compared to 2015), hair treatments (6 percent), liquid soaps (34 percent) and mouthwash (13 percent).

While hygiene certainly appears to be a top priority for most Filipinos, Kantar Worldpanel’s data noted a 5-percent decline in the total sales of the deodorant and cologne/fragrance categories. Specifically, deodorant sales increased by only 1 percent last year compared to 2015, while spending on fragrances dipped by 11 percent.

Gladys Pantastico, Kantar Worldpanel senior account manager and beauty insights expert, speculates that this could be an effect of the production of fabric conditioners with perfumed scents.

“Interestingly, we have seen a 16-percent rise in fabric conditioner sales, which may be attributed to the recent aggressive launches of fabric conditioners with scented variants,” she says. “This may be an indication that shoppers have opted to purchase these products more due to their long-lasting scents and cheaper prices.”

When it comes to skincare products, Kantar Worldpanel found that while sales decreased by 3 percent, a growing sophistication when it comes to their purchases can be observed among Filipinos.

Such purchase sophistication, says Pantastico, could be explained by the fact that the majority of Filipino households can be categorized as young, and, therefore, more particular about their beauty regimen.

“According to the Philippine Statistics Authority, 36 percent of the Filipino population are from young households. This may explain the pragmatic, yet sophisticated, view of Filipinos when it comes to their beauty product priorities,” Pantasticso says. “Filipino shoppers want value for their money, but they are willing to spend on smaller formats that appeal to their needs and desires. These findings offer great points for brands to explore and take advantage of in the local FMCG market.”