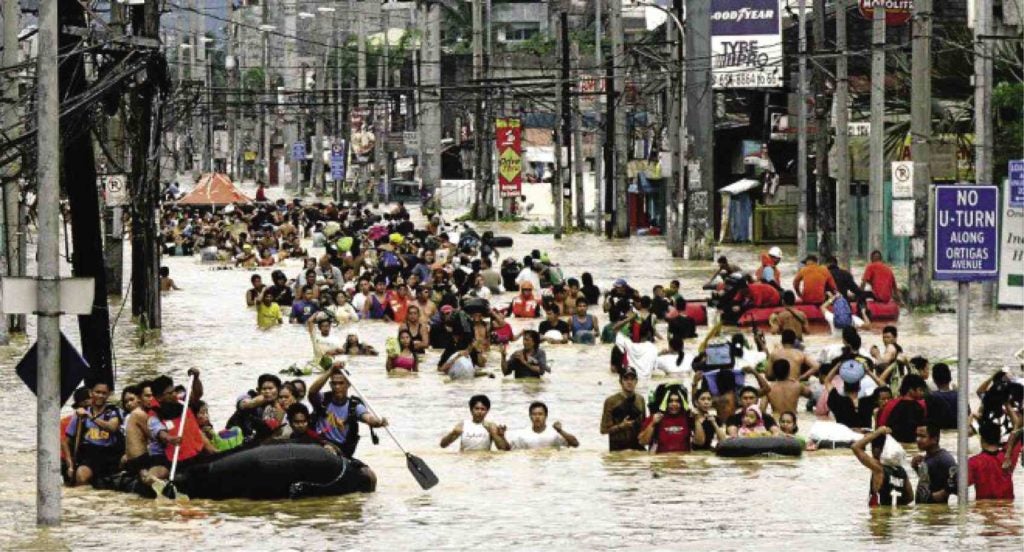 Rescuers ferry stranded residents from their houses as floods caused by Tropical Storm Ondoy in 2009 devastated parts of the metro.

It is amazing how some people turn problems into opportunities. Such is the case of the Dutch and their way of dealing with floods.

With most of Netherlands situated below sea level, the nation was once beset with catastrophes. These experiences though have taught them how to adapt to their plight.

Today, many turn to the Dutch for help in developing flood control measures. They have managed to evolve from victims to experts. It is fascinating to learn how they deal with the same problems Filipinos face.

Surprisingly, many of their techniques contradict common practices but prove to be effective.

Filipinos can learn a lot from the Dutch, not only from their methods but also their attitudes. Despite their constant water surges, the Dutch have learned to embrace their country’s character and celebrate it.

What if we Filipinos too could embrace the reality of floods in our country, and learn to manage it, rather than stop it? It would be amazing if we could also find a way to live with our country’s features and see them as opportunities, not problems.

After all, despite some challenges that we have faced in the past, the Philippines remains as scenic and tropical as ever. It would be awesome if we could also make floods a chance to make our country more beautiful.

During a major flood in 1995, Netherlands’ floods came mostly from the Rhine River. While the country was protected from the sea by a dike system 2,500 kilometers long, river floods destroyed reclaimed lands. The dike walls prevented a worst-case scenario, but prolonged exposure to flood water made them weak.

Had these defense walls collapsed, Netherlands would have gone under 20 feet of water (Barcelona Field Studies Centre). Because of this experience, the Dutch began to look toward other means of dealing with the floods.

After this event, the government of Netherlands implemented a program to manage, rather than prevent, water surges. They introduced the “Room for the River,” a radical set of new measures to combat floods.

The program was founded on the premise that land should be returned to the river, an opposite approach to reclaiming land. The idea was that by widening the river, the direction of its flow could be controlled. Safety could be ensured by directing water away from people and properties.

Some of the measures implemented with the program were lowering flood plains, relocating dykes, and providing more catch-basins.

The Eendragtspolder in Rotterdam, in particular, is a man-made reservoir that replaced fields and canals. It has become a public park offering water sports, even hosting the World Rowing Championships in 2016. With the development of this reservoir, the Dutch have managed to create a tourist spot and an emergency solution in one.

It is amazing that they do not prevent water flow, but rather, encourage it.

Though widely acclaimed, the “Room for the River” program is not the only measure used to manage floods. At the domestic level, citizens are also encouraged to do small acts to help with water management.

In the city of Rotterdam, people are encouraged to keep soil gardens instead of concrete pavements to allow water absorption in yards. There are incentives being offered to those who build green roofs on their houses.

Moreover, people living in flood-prone areas are given a choice to stay or leave their properties.

On one hand, those who choose to stay are assisted to build new homes on elevated mounds. On the other hand, those who relocate receive compensation in exchange for their homes.

As the effects of possible flooding are made clear to them, most residents comply with the program. Through small acts, citizens play an informed and proactive role in flood prevention.

Despite their unfavorable circumstances, the Dutch have managed to adapt themselves quite well to water.

Their take on the global problem of flooding is refreshing. They have chosen to work with challenges instead of fighting them. (Sources: www.nytimes.com; geographyfieldwork.com; www.ruimtevoorderivier.nl)

The author is a Filipino architect who studied and lived abroad for a while. Currently working for the local firm DSFN Architects, she values her time abroad for all the lessons she learned from other cultures.