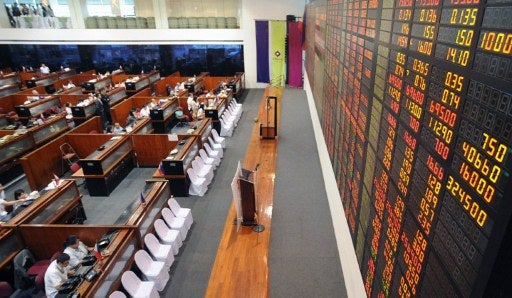 Reversing sluggish trading in early trade, the main-share Philippine Stock Exchange index gained 35.94 points or 0.44 percent to close at the intra-day high of 8,180.85. This marked the PSEi’s best finish in history.

“Market sentiment continues to be
positive buoyed by the favorable outlook of analysts on the overall market. This optimism was again validated with the market closing today at yet another record high and with trading value exceeding P11 billion. We remain hopeful that our market levels and trading volumes continue to be robust,” said PSE president Ramon Monzon.

“Philippine equities closed mostly higher as the country was perceived as a less risky asset class. The perception that we have entered bull market has become stronger, and (even) after strong US inflation data raised the possibility of tighter monetary policy from the Federal Reserve,” said Luis Gerardo Limlingan, managing director at local stock brokerage Regina Capital Development Corp.

“Traders also appeared cautious after the latest threats from North Korea and (they) switched to the Philippines instead of other countries more directly involved (in this geopolitical showdown),” Limlingan added.

Moody’s expects robust economic growth to be sustained over the next few years, aided by the government’s focus on infrastructure development, buoyant private sector investment, and the recovery in external demand.

“The re-emergence of conflict in the southern Philippines, and the administration’s focus on the eradication of illegal drugs, represents a rising but unlikely risk to economic performance and institutional strength,” Moody’s said.

Except for the financial sub-sector, all counters gained at the local market. The biggest gainers were the property and mining/oil counters which both advanced by over 1 percent.

Buying activities, however, focused on selective large-cap stocks. In the broader market, there were more decliners (101) than advancers (98).

Investors gobbled up shares of Semirara and ICTSI, which both gained over 2 percent, while Ayala Land and SM Investments both rose by over 1 percent.

On the other hand, GT Capital slipped by 2.09 percent while AGI fell by 1.88 percent.