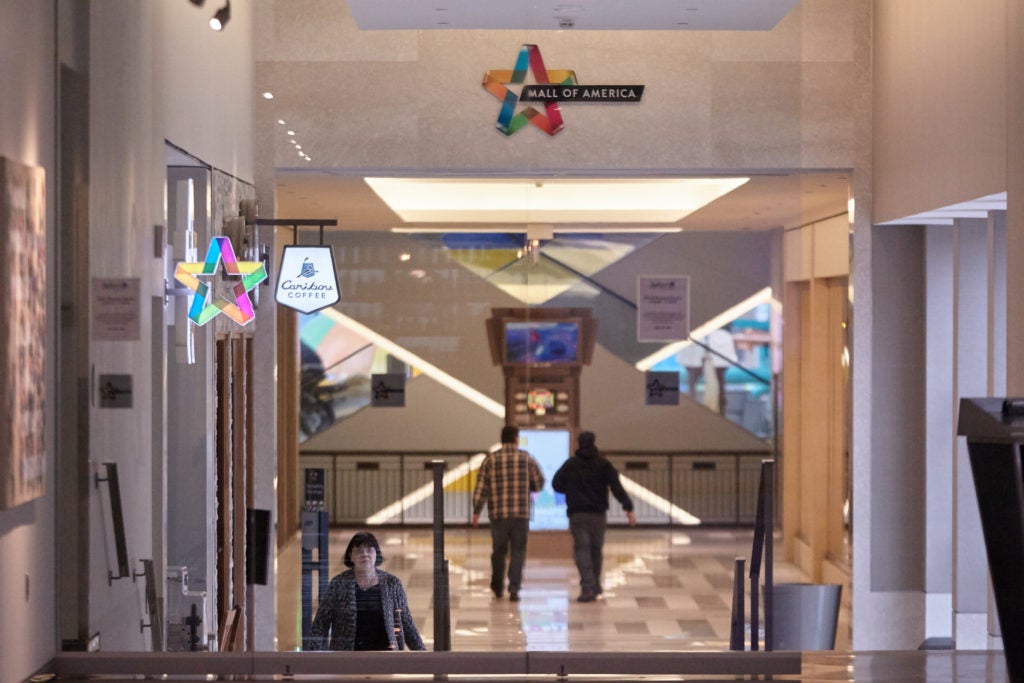 Shoppers walk through Mall of America during a media tour of its security systems on February 23, 2015 in Bloomington, Minnesota. AFP FILE PHOTO

As the retail industry churns in the Amazon era, American shopping malls are turning to a new generation of stores, food and entertainment offerings to make up for an exodus of department stores.

Prime mall real estate is increasingly going to players who began online and are graduating to brick-and-mortar, such as plus-size clothing label Eloquii, or stores selling niche items like candy and conflict-free diamonds.

In some cases, these retailers are taking space, literally, from exiting chains like Macy’s.

Other additions include the trendy burger restaurant Shake Shack, and Dave & Buster’s, whose video game and pro-sports viewing restaurants are emblematic of the “experiences, not stuff” mantra now resonant among consumers.

The changes to malls — climate-controlled beacons to American consumerism that grew rapidly in the latter part of the 20th century — are part of a fundamental industry rethink as e-commerce, led by gargantuan purveyors like Amazon, takes market share and alters consumer expectations.

“This isn’t the same culture as 30 years ago,” said retail industry analyst Dana Telsey, who sees today’s moves as the “early innings” of a multi-year evolution.

Malls will endure because they offer “the excitement of being able to see what’s new,” she told AFP. “It’s a meeting place. It’s an entertainment center.”

The changing times are a period of reckoning for hundreds of second-tier shopping centers in a country that experts say has long been “overmalled.”

A January review of 1,070 malls in the US by Green Street Advisors, a real estate research and advisory firm, classified more than 330 malls as “at risk to close” due to declining occupancy, low sales, weak socioeconomic demographics and anchor store vacancies.

“These malls only account for roughly five percent of mall value in the US,” the report said. “Most won’t be missed.”

Survival of the fittest

Many of the most vulnerable malls were built in the 1960s and 1970s with department stores as anchors that attracted enough customers to also support secondary stores.

But stores in malls were often pricier than free-standing shops because of the heavy rents for common costs such as heating, maintenance and security, said Fred Hurvitz, professor in retail studies at Penn State University’s Smeal College of Business.

The arrival of e-commerce and greater price transparency means malls must compete not only with Amazon for more cost-conscious customers, but with discount chains.

“You’re seeing a whole movement towards any way you can save the customer money, that’s going to make you more viable with the customer,” Hurvitz said. “Without high traffic levels, the malls die.”

The exodus of retailers means shopping centers that were once hives of activity are hollowed-out shells with a few well-stocked shops surrounded by empty storefronts. Parking lots that were jammed with cars a few decades ago are now mostly empty seas of asphalt.

Kumar joined a Planet Fitness gym that opened earlier this year at Columbia Mall in a space formerly occupied by Sears, and he says he hopes that increased traffic from gym members will spur more activity.

But it was not, perhaps, a good sign when Columbia Mall was profiled earlier this year by filmmaker Dan Bell as part of his YouTube “Dead Mall Series.” The Baltimore documentarian has also featured visits to seen-better-days malls in North Carolina, Tennessee and Maryland.

Bell’s portfolio was spotlighted in a July New York Times Style story that rued the passing of an era.

Yet mall developers dismiss talk of their demise despite today’s retail industry travails.

“We’re pounding the pavement more than ever,” he said in a conference call.

Simon said he has been encouraged, however, by a trend of e-commerce chains like apparel maker Eloquii or eyeglasses seller Warby Parker raising capital to open brick-and-mortar stores. Some of these newer brands could ultimately have as many as 400 stores, he said.

“In this cluttered world of trying to get people focused, we are seeing more and more brands that want to gravitate to where the traffic is,” Simon said. “By and large, in communities throughout the country, that’s the mall. And that has not changed.”

GGP, another real estate investment trust, plans $1.5 billion in mall investment, including a greenfield mall in Norwalk, Connecticut and a major expansion to the Staten Island Mall in New York City that it bills as a “shopping center of the future.”

GGP has also budgeted “refresh capital” for existing malls — sometimes stretching into the millions of dollars. The company recently removed an old fountain and spiffed up the dining area at its Wayne, New Jersey mall.