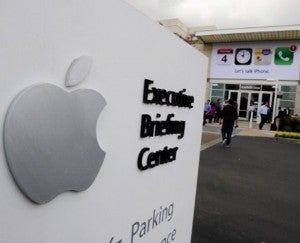 WASHINGTON—Shares in Apple held steady Thursday despite concerns that the death from cancer of founder Steve Jobs’ robbed the firm of its key source of vision and direction.

Despite a slew of brokers’ “buy” recommendations in the day following Jobs’ death, investors remained cautious, none-too-sure that the company can maintain the magic that made it the world’s second largest company, by market capitalization, after ExxonMobil.

The decline came as the markets overall surged, helped by new optimism over the European crisis, with the Dow Jones Industrial Average jumping 1.7 percent, and the Nasdaq Composite — where Apple carries much weight — rising 1.9 percent.

Apple’s shares have outperformed the markets all year, rising even as key indices plunged in August and September, and even as Jobs’ health got visibly worse until he turned over the reins of the company officially to new chief executive Tim Cook in August.

The shares started the year at $330 and then pushed up sharply in July to above the $400 line for a short time.

Cook disappointed some fans and investors in his first big solo performance Tuesday to release a new version of the iPhone4, and the share price sagged to $357 before recovering somewhat.

But tech sector analysts were more positive about the launch, adding or reiterating “buy” calls on the company in the past two days, both before and after Jobs’ death was announced. Several put near-to-medium term price targets for Apple of between $500 and $666.

Shaw Wu of Sterne Agee sets a target at $500, arguing the company will still have a huge culture of innovation in Jobs’ absence.

“We are buyers on potential weakness in AAPL shares as we believe the company has transformed itself into one of the key platforms of the future, with iCloud and the App Store poised to benefit in the upcoming decade from a company that produced hot products,” said Wu.

However, he added, “in the near-term, the stock may remain volatile as Tim Cook gains confidence from investors.