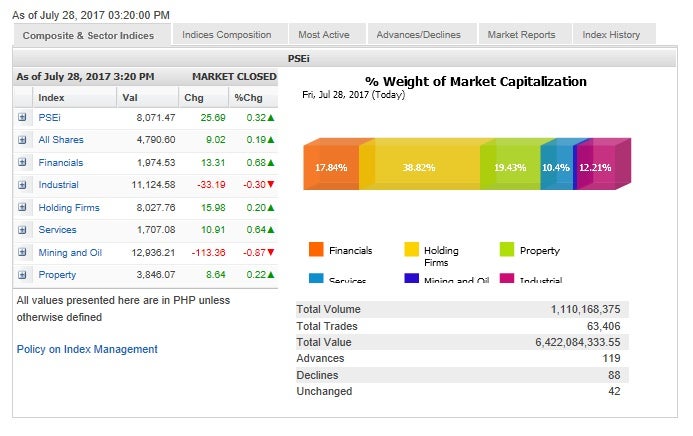 The local stock barometer is seen striving to consolidate above the 8,000 mark this week following last week’s bullish breakout.

The main-share Philippine Stock Exchange index (PSEi) rallied for the second straight week last week by 1.02 percent to close at 8,071.47 on Friday in anticipation of the second quarter local corporate earnings season and the passage of the first package of the government’s comprehensive tax reform program.

“Friday’s performance tells me that investors are starting to get off the sidelines and reentering the market, though with caution,” said PNB Securities president Manny Lisbona, noting, however, that value turnover remained thin at P6 billion.

“The market is now within striking distance of the all time high of 8,134, which the market has tried to surpass just a little over a year ago. What is key now will be that the market holds above 8,000 and if the bulls do attack the all-time high, that the level is sustained; otherwise, a bearish triple top will be formed,” Lisbona said.

If the PSEi falls below 8,000 in the next two weeks, it will likely correct downwards, said Eagle Equities president Joseph Roxas.

For last week’s breakout to be confirmed, Roxas said the PSEi would have to stay above 8,000, after which the next target would be 8,300.

“It should stay above 8,048 with enough volume to show that there’s a change of hands,” he said.

“Chartwise, the week’s close at 8,071.47 signals a breakout from a three-month long consolidation between the 7,700–8,000 levels. This could push the market to test the 8,100-8,150 levels initially. But it has the momentum to bring it up to 8,300 levels,” said Jonathan Ravelas, chief strategist at BDO Unibank.

Immediate support and resistance were seen at 7,950 and 8,150 levels, respectively, Ravelas said.

This week, the market may see a continuation of window-dressing activities, said Luis Gerardo Limlingan, managing director at Regina Capital Development. “At the same time, investors may start cleaning their portfolios ahead of the much anticipated ghost month,” Limlingan said.