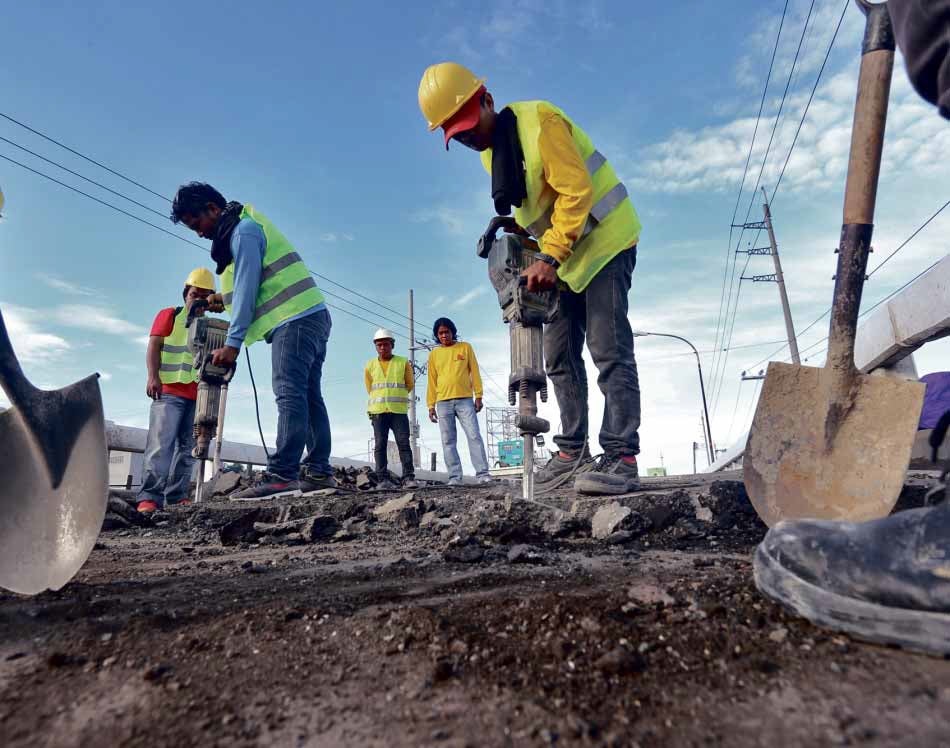 P8-TRILLION INITIATIVE Under its “Build, Build, Build” program, the Duterte administration will spend over P8 trillion during its six-year term so that the share of infrastructure spending in the country’s gross domestic product will rise from 5.3 percent this year to 7.4 percent in 2022. —INQUIRER PHOTO

The “Dutertenomics” thrust of “Build, Build, Build” aimed at ramping up infrastructure development, which critics compare to former President Ferdinand Marcos’ public investment program, would not result in a debt crisis similar to the one that “plagued” the economy in early 1980s, the Department of Budget and Management said Friday.

Also, amid expectations of sustained economic growth in the medium term, the country’s debt position would remain stable despite the planned increase in borrowings to fund the Duterte administration’s ambitious pipeline of infrastructure projects, the DBM said in a statement.

“Prior to the crisis in 1983, capital outlays as a share of gross domestic product (GDP) hovered at 5 percent. This is comparable to the projected capital investment program of the Duterte administration,” the DBM said.

For 2017, capital outlays as a share of GDP had been programmed at 5.7 percent, while the infrastructure spending-to-GDP ratio was at 5.3 percent.

The capital outlays-to-GDP ratio had been projected to rise to 7.5 percent by 2022, alongside an increase in the share of the infrastructure budget to 6.9 percent of GDP.

But the DBM said a difference lies in the sense that “the Duterte administration is more focused on infrastructure rather than other capital outlays such as corporate equity and capital transfers to local government units.”

Also, “economic conditions have changed that will enable the Philippine economy to weather external headwinds and avoid an economic/debt crisis,” the DBM added.

“Lending rates are at an all-time low; the Philippines gross international reserves are hefty; its macroeconomic fundamentals are sound with declining debt-to-GDP ratios and prospective growth rate of 7-8 percent pegged for the medium-term. These factors cannot be said for the years leading up to the 1983 Philippine economic/debt crisis, which led to skyrocketing debt-to-GDP ratios and debt service payments,” the DBM noted.

As such, the DBM claimed that “concerns over a looming debt crisis, as a result of the Duterte administration’s ‘Build, Build, Build’ program are unwarranted.”

“Economic conditions have changed for the better, and we have learned from the mistakes of the past,” the DBM said.

While the Duterte administration plans to spend up to P9 trillion  from 2017 to 2022 to achieve a “golden age of infrastructure,” the DBM said it will finance the programmed wider budget deficit of 3 percent of GDP with a borrowing mix of 80-percent domestic, 20-percent external in order to mitigate foreign exchange risks.

“Despite increasing the planned deficit, the Philippine economy will outgrow its debt burden as economic expansion (GDP growth) outpaces the growth in the rate of borrowing. Hence, the fiscal strategy is manageable and sustainable. This is measurable through the debt-to-GDP ratio. Given deficit spending of 3 percent of GDP, while growth rate is targeted to reach 6.5-7.5 percent this year and 7-8 percent from 2018 to 2022, (plus inflation of 2-4 percent), it’s clear that the ratio is bound to fall,” the DBM pointed out.

“In fact, the debt-to GDP ratio is projected to decline from 40.6 percent in 2016 to 38.1 percent in 2022. As compared to its Asean neighbors, the Philippines continues to post a steady debt-to-GDP ratio. Singapore, for instance, posted a high debt-to-GDP ratio of 98.2 percent as of 2016,” according to the DBM.

“Furthermore, the Philippines’ external debt has also been decreasing from $77.474 billion in 2015 to $73.805 billion as of March 2017. This highlights that the country is doing well in paying off its debts,” it added.

As for borrowing rates, the DBM noted that these “have plummeted in this era of low interest rates,” hence should be tapped to spend more on infrastructure.

“With the cost of borrowing money at their lowest levels, we must take advantage of the favorable financing terms presented to us. This will provide funds for our ambitious infrastructure and social services program without squeezing our fiscal position with heavy interest payments,” the DBM said.

As such, “concerns that the Duterte administration’s fiscal strategy may lead to indebtedness are therefore unsubstantiated, considering the current and expected levels of debt-to-GDP ratio, the hefty gross international reserves, and the low interest rate regime,” according to the DBM.

“The government’s fiscal strategy is manageable and sustainable, as the expected gains from infrastructure development shall fuel economic growth. This growth will outpace the debt burden, and suitably, the Philippines will not be plunged into unreasonable indebtedness,” it said.