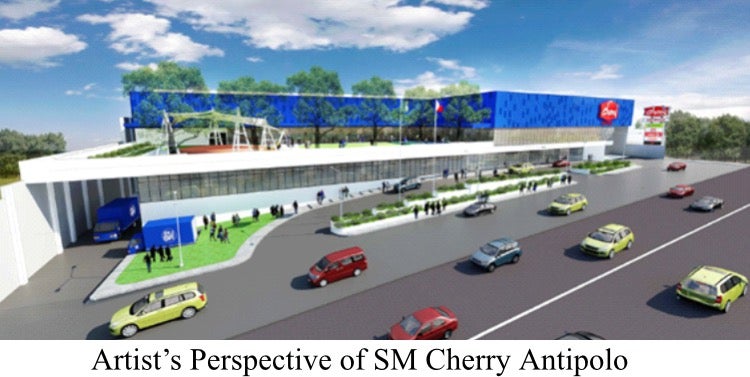 Southeast Asian property giant SM Prime Holdings, Inc. (SMPH) has expanded its footprint in Rizal with the opening of a modernized Cherry mall in Antipolo, its 63rd shopping center in the country.

SM Cherry Antipolo, which is set to open on June 30 (Friday), is located along Marcos Highway with a gross floor area (GFA) of 27,000 square meters. This additional mall brings the total retail footprint of SMPH in the country to 9.1 million square meters in the Philippines and China.

“This three-level mall will open with 55 percent of its space leased awarded and will feature an enhanced shopping environment for the community,” SMPH said in a press statement on Wednesday.

The mall plans to offer expanded services beyond traditional grocery, and a Skygarden with covered dining areas and walking paths in its second level for shoppers to witness a comfortable and inviting outdoor experience.

“SM Cherry Antipolo is the third Cherry Foodarama outlet in the country that SM Prime re-opens to public after acquiring the brand. The opening of this mall provides the company a stronger foothold in the eastern part of Metro Manila along with our three other malls in Rizal province, the SM City Masinag, SM City Taytay and SM Center Angono,” SMPH president Jeffrey Lim said.

The mall is set to expand the presence of the SM Group in the Rizal province by bringing SM Supermaket, Ace Hardware, Watsons, and BDO closure to consumers.

In 2015, two of the Cherry stores under the management of SM Markets were opened in Shaw Boulevard and Congressional Avenue.

According to SM Markets, the stores offer world-class shopping at everyday affordable prices. Cherry stores also have clothes, toys and home improvements made available for buyers.