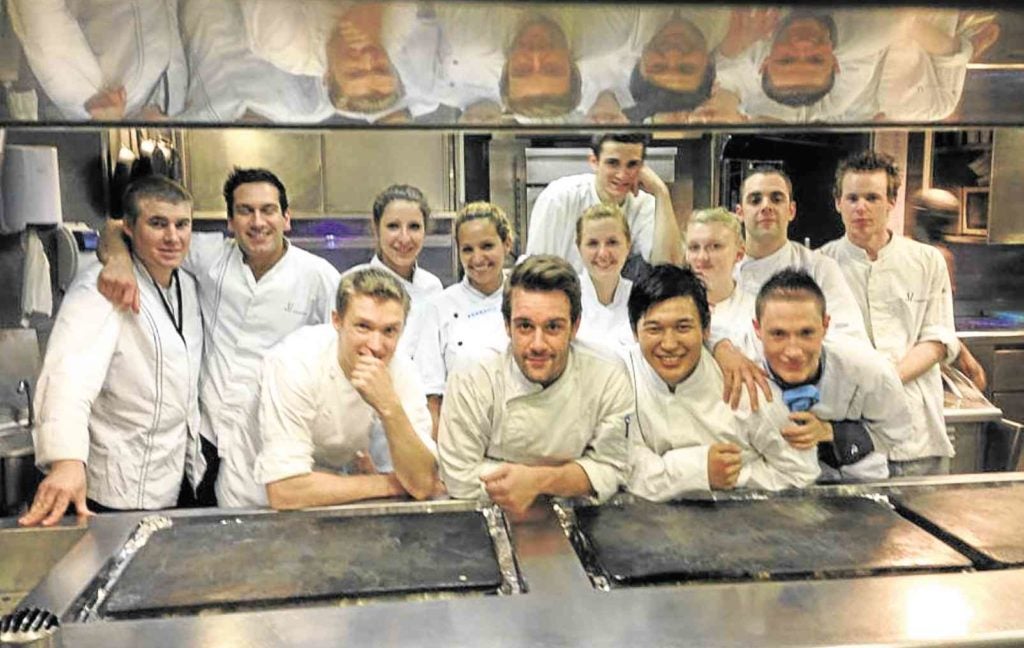 One of the questions usually posed upon this writer is where to eat good Filipino food. I always go with my personal favorite, the humble but reliable Aristocrat, which I think captures the essence of Filipino home cooking. (Props to Philippine Airlines on its decision to serve Aristocrat chicken barbecue on its flights!)

But where do you take a guest who expects Filipino fine dining? I have just found the answer.

Restaurant 101 in Enderun Colleges has a new chef de cuisine. The chef is only 24 years old! But already, he shows mastery of French cooking techniques as if he has been working the kitchen for 50 years.

But even better, he interned through the Ducasse Institute internship program of Enderun Colleges, at the Michelin-starred Le Jules Verne of chef Alain Ducasse in Paris no less. 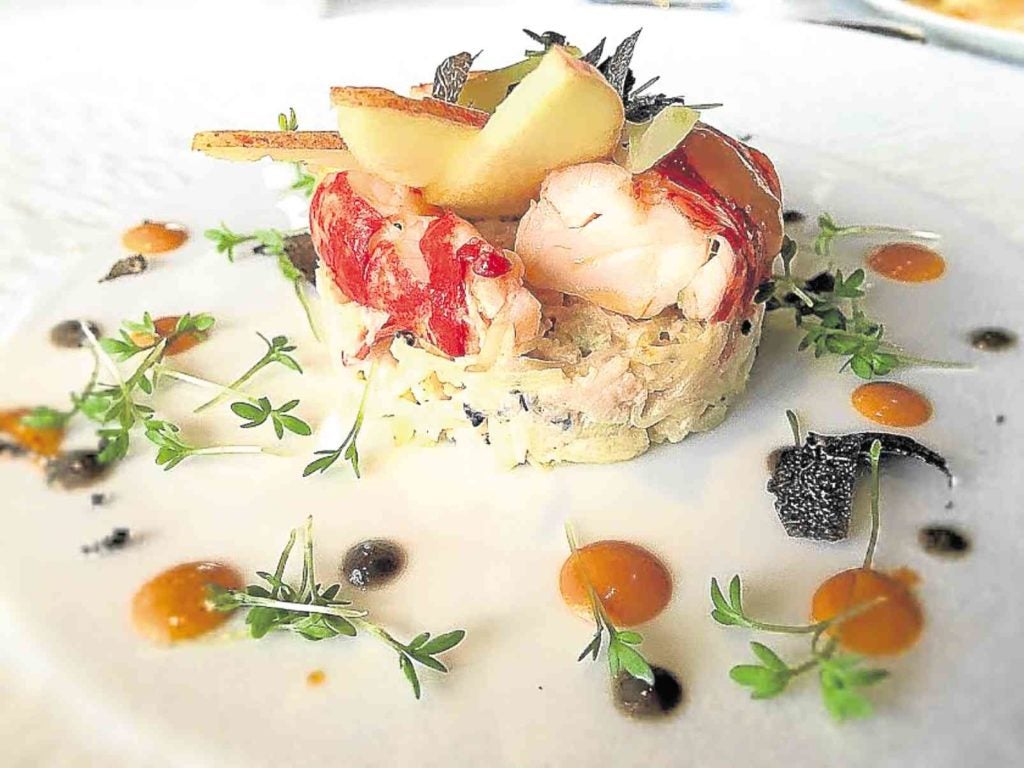 Le Jules Verne is a restaurant in the Eiffel Tower. Imagine eating with the view of the City of Lights! I had the privilege of dining here a couple of years ago and the experience is simply surreal. Best of all, the kitchen serves up dishes that reflect the best of French cooking—refined yet hearty, teasing the eyes and palate, and perfect with fine wine—to make the dining experience match the spectacular view. One would, of course, expect no less from a restaurant of Alain Ducasse, the world-renowned chef who holds the record of becoming the first chef to own restaurants carrying three Michelin stars in three different cities.

“My goal ever since I came to Enderun was to work in Paris,” chef Justin shared over a phone interview. And what a way to achieve that goal, working six months at no less than the Eiffel Tower.

The young chef worked 12 hours a day in the Le Jules Verne kitchen, focused on the food not just because he was intent on learning everything he can from one of Paris’ most celebrated restaurants but, on more practical terms, because of the language barrier. “Only two persons spoke English. I had to learn French the hard way,” he recalls.

The Enderun intern, however, did not need to adjust much in the language of food. “The techniques they use there, they already teach here in the Ducasse Institute at Enderun,” he says. “So I already knew what to do.”

Instead, at Le Jules Verne, under the tutelage of executive chef Jemmy Brouet, he learned the discipline of creating the exact same dish meeting the same high standards expected of a Michelin-clad Ducasse restaurant at least 100 to 120 times at lunch and 100 to 120 times at dinner. Yes, that’s the number of covers or customers the Eiffel Tower fine dining restaurant has per day.

He learned, by sheer virtue of embodying this discipline everyday, the ability to be consistently excellent in the kitchen.

So chef Justin has come back to the Philippines with a mastery of Ducasse culinary skills and has become, at only 24, the first Filipino chef de cuisine at Restaurant 101, the showcase restaurant of the Ducasse Institute Philippines.

I have only tried his cooking once but I must admit, I was deeply impressed with his interpretation of Filipino food.

At a dinner hosted by Enderun president Ed Rodriguez for Nagore Espinosa of Bilbao-based tourism consulting firm in2destination, which helps companies and countries become sustainable and inclusive tourism destinations, chef Justin for the first time whipped up a Filipino menu. 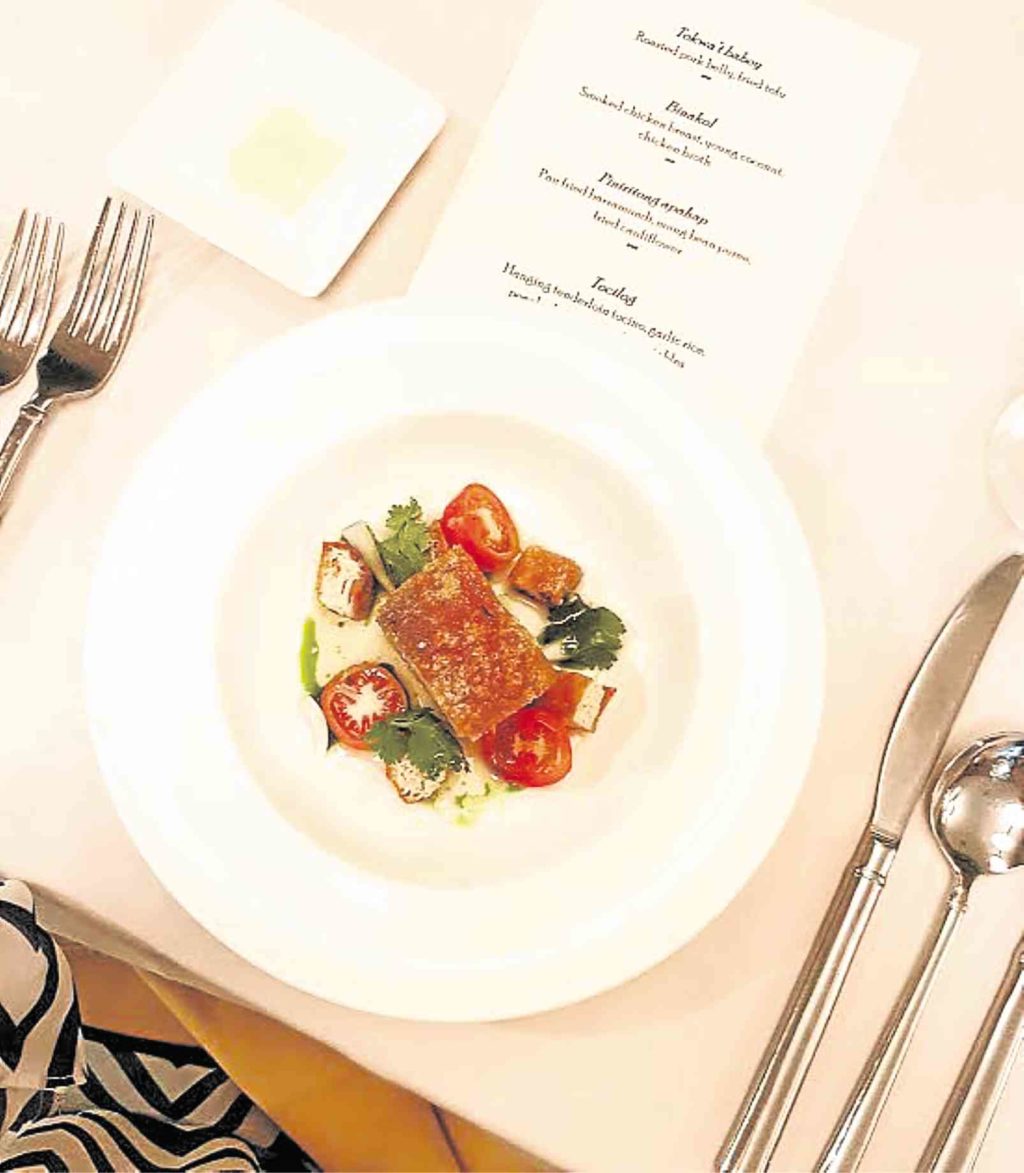 Dinner started with a tokwa’t baboy. Yes, the very peasant, karinderya and beer garden staple tokwa’t baboy. But chef Justin made it look like a dish singing songs of summer. The plate looked like something you would have in La Cour Jardin at Plaza Athenee, another Ducasse restaurant in Paris, yet it did not lose the soul of what you would have at, say, Dencio’s.

For soup, chef Justin served chicken binakol. He served it in a giant martini glass instead of the usual coconut “bowl”—so sophisticated yet hearty.

The lutong-bahay galunggong and munggo inspired a perfectly cooked apahap (Philippine seabass). The mung bean puree supported the star of the plate, the apahap, by breaking its monotony, giving it a contrasting texture and simply making the meal more filling.

The quintessential Filipino breakfast of tapsilog or tocilog was tweaked for a fine dining experience by chef Justin by presenting a “tocino” tenderloin. The accompanying rice was beautifully wrapped in pechay leaves and the achara was made into a tiny bouquet wrapped with seaweed.

Most impressive, and I am told this will now be on the regular menu of Restaurant 101, is chef Justin’s bibingka, which he created with Restaurant 101’s pastry chef Katrina Sy.

It comes in the form of a souffle. But when you dig in, it undoubtedly has the spirit of a bibingka—only fluffier. Make sure to dig toward the bottom for the benefit of the itlog na maalat.

I write this with the ulterior motive of inspiring chef Justin to continue cooking Filipino food, i.e. “elevated” Filipino food at Restaurant 101. If these choices will be made available, this will be my new go-to for all visitors who want to “experience the Philippines.”