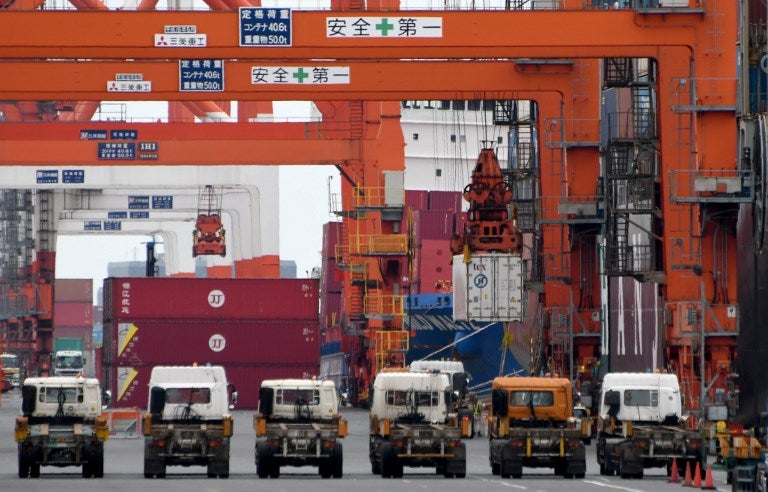 Containers are transferred onto the trucks at an international container pier at the port in Tokyo on July 25, 2016. Japan unexpectedly slumped back into a trade deficit for the first time in four months, as soaring energy import bills offset growth in the country’s shipments abroad, government data showed Monday. AFP

Japan logged a surprise deficit of 203 billion yen ($1.8 billion), the first red ink in four months, according to data from the finance ministry, despite market expectations for a surplus.

“Crude oil prices rebounded while the yen was weaker in the month,” Yuichiro Nagai, economist at Barclays Capital, told AFP.

The yen was 2.3 percent weaker against the dollar compared with levels recorded a year earlier, which helped push up imports costs.

The deficit came as a surprise after recent data showed Japan’s economy was picking up steam with exports growing on the back of a global economic recovery.

Nagai said there was no need to be overly pessimistic over figures for a single month.

May data showed “a correction in speed” but the Japanese economy is likely to continue to expand in the July-September quarter even if it stalls in April-June, he said.

The May deficit is “mainly because of a rise in imports, reflecting Japan’s resilient economy”, Minami said.

Overall exports in May rose 14.9 percent from a year earlier to 5.85 trillion yen thanks to an increase in shipments of cars and steel, chalking up growth for the sixth consecutive month.

The growth in exports is partly thanks to a rebound after powerful twin quakes in southwestern Japan last year disrupted production and supply chains.

Japan’s dependence on fossil fuels has risen since the nation shifted to thermal power generation with most of the nation’s nuclear reactors remaining offline after the 2011 Fukushima earthquake/tsunami disaster.

US President Donald Trump has vowed to root out “unfair” trade practices around the world and target other countries including Japan.

Japan’s Prime Minister Shinzo Abe has been trying for years to rejuvenate growth and end an extended period of on-and-off deflation through a policy blitz of easy money, stimulus and reform.

Despite the uptrend in the overall economy, consumer prices remain below the Bank of Japan’s two percent inflation target. CBB