Liliw has a new spring in its step 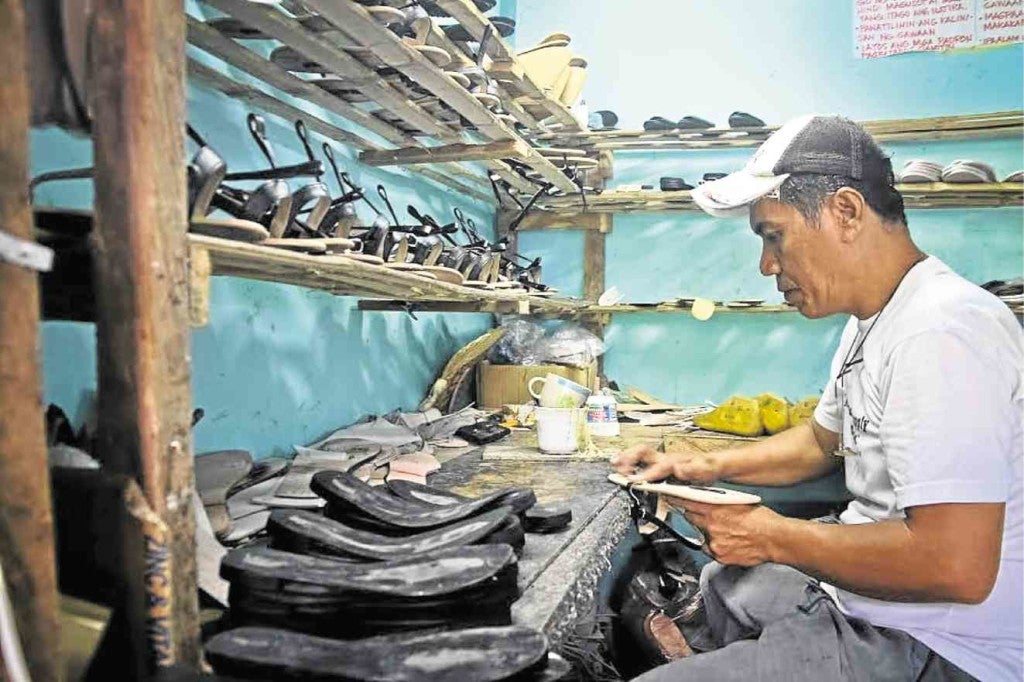 LILIW, Laguna—For humble slippers or flip-flops lovers who put durability over design, the town of Liliw, dubbed the tsinelas (slipper) capital of Laguna, is the place to be.

The town is home to cheap and durable slippers sold in hundreds of footwear stores.

Pisueña, dubbed “the father of the tsinelas” in this town, made his first pairs of slippers using tistis (coconut spathe) and interiors of rubber tires, said Sulibit.

Pisueña’s footwear lived up to its name, Dimasira, a derivative of the Tagalog phrase “hindi masira” (indestructible).

Since then, locals established their own footwear-making businesses, totaling to over 200 today, including those who make footwear in their homes and do not have a physical store, said Sulibit.

A pair of casual slippers can sell for under P200, while ladies’ and men’s shoes and sandals are priced from P250 to P850 a pair.

“When you say Liliw-made, aside from cheap, it is also durable. That is where we compete,” said Sulibit.

The municipal government passed an ordinance to incorporate tsinelas-making into the K-12 curriculum starting this year in order to preserve the 86-year-old industry, Sulibit said.

Still mainly a cottage industry, Liliw’s footwear-making comprises 15 to 20 percent of the town’s economy, according to Sulibit.

Wilma Padua, owner of Lilio Elite Footwear (established in 2014), buys her raw materials like cloth, straps, leather, synthetic leather, and shoe soles from the city of Biñan, also in Laguna.

Salvador Monteiro, owner of Badong Footwear that now stands on Dimasira Footwear’s former location, also buys local raw materials, but accessories like buckles and buttons were bought from Hong Kong and other countries.

Peak months are from March to May and from October to December, said Padua. Monteiro said they design new footwear during off-peak seasons.

Padua said she wanted to procure machines in the future to speed up production.
“The good thing with machines [is] you can produce in bulk,” she said.

Padua said it was currently taking them three to four weeks to complete orders of 250 pairs.

“If we have machines, for sure, we can finish those in one week, and you employ less people,” she said.

“We were given modern machines by the Department of Trade and Industry, which can be used by our tsinelas makers,” Sulibit said.

Monteiro, on the other hand, is not keen on mechanizing his production although the straps of his footwear are machine-made.

“The shoes are still handmade. Many businesses in Marikina failed because they used machines,” Monteiro said.

He explained that shoe-making machines can only make a certain design and if that design becomes passé, the machine cannot be used anymore and becomes a dead investment.

Liliw’s slippers have already reached clients in Visayas, Mindanao and other countries. The municipal government brings their footwear makers to trade fairs outside of Liliw to expand customer base.

Padua supplies footwear to shops in Davao and the Visayas. She said she also has clients in Dubai, the US, and Morocco, who buy from her wholesale.

“Ever since, that is our bread and butter,” Monteiro said. Monteiro is mostly engaged in exporting and has clients in Hong Kong, Singapore, Hawaii, and New York.

Despite a strong market, the industry faces competition from cheaper footwear from China, Korea and Thailand.

“As of now, business is declining a bit because there are a lot of competitors,” said Padua.

The minimum wholesale price of flats is between P230 and P250 a pair, but the foreign-made ones sell from P120 to P150 a pair, said Padua.

But Liliw slippers has quality as selling point.

“The malls and shops prefer footwear from Liliw because they are sure of the quality. Our flat shoes are sewn at the bottom so that even when they get wet from the rain, they will not easily come apart. Those from China, you use them once, they’re almost disposable,” Padua said.

Monteiro was not worried about the competition at all. “Not really, because we never do mass production. We concentrate on the quality,” he said.

“Always concentrate on the quality, never in quantity.”

However, the industry needs a solid entity for its survival.

“Before, there were [shoemakers’ associations], but now they are not active anymore. There were two, then there was one,” Sulibit said.

She said the footwear makers should organize themselves to avoid sharing the same fate that the Marikina shoe industry had due to the absence of a shoemakers’ association.

“If there is a strong association and there is one standard in terms of price, in terms of quality, no one will sink. There will always be healthy competition,” she said.

“Social media is the strongest marketing arm of everyone now, especially the [tsinelas makers]. Lots of them have online [presence]. They are very active,” Sulibit said.

Padua has abandoned her physical store and now uses social media for her transactions with clients. Clients pay her through bank deposit or money remittance, then she sends their orders through a local courier service.

“Business is better online. I can save on monthly rent and on staff. You own your time. You are able to capture a larger audience locally and internationally,” she said.

Padua also keeps herself updated with the latest trends online.

Monteiro also keeps abreast with trends through the internet, aside from looking at latest women’s magazines and through traveling. But he finds doing business online more of a hassle than an advantage.

Although Badong Footwear has a social media page, it still keeps a physical store.

“I noticed there are frequent inquiries [online] regarding the size, the price,” Monteiro said. He considered it a nuisance since not everyone who inquires buys.

“Tourists visit Liliw because of the tsinelas. It is really the number one contributor to tourism,” Sulibit said.