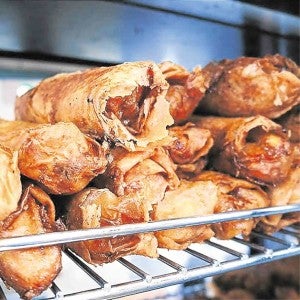 Turon, that favorite snack of Filipinos, has proven to be a moneymaker for SM Markets, which covers SM Supermarket, SM Hypermarket and Savemore Market.

Turon, composed of bananas, jackfruit, and brown sugar wrapped in lumpia (spring roll) wrapper, measuring 8 inches in length and 2 inches in diameter, and sells for only P15 a piece, has been developed by SM into a delectable story of growth.

It was the young Sy who saw the potential in the merienda staple that is favored by Filipinos from all walks of life.

And he did not want to put out just any turon.

Coming from his strong retail background, the younger Sy wanted to offer good quality turon in every SM Markets store, inside glass warmers, making sure that it’s hot and freshly made, consistent with SM’s track record for food safety and quality at an affordable price.

“We wanted a ready-to-eat product that SM’s customers from all walks of life would want to eat. We want our customers to enjoy a quick hunger fix without them having to go through the hassle of preparing it.” Sy said.

“The success of turon is proof that Filipinos tend to look for that familiar taste at a price that’s sulit [value for money]. Despite turon being a simple merienda, we learned that our customers would see the value of paying P15 versus preparing it at home. Our customers tend to build a suki relationship when quality is consistent no matter which branch or what time they buy their turon.”

With SM’s turon, shoppers are ensured that they will get the same quality, the same flavor, the same size, and the same value for money every time, Sy said.

Turon’s charm lies in its sweet and fruity flavors.

It is filling yet can easily be bought with loose change.

And though it is handy enough to be consumed on the go, it is not that easy to make; an opportunity SM saw back in 2012.

SM Markets not only standardized its turon measurement, but it also saw to it that the taste is also uniform across stores.

Fresh saba, brown sugar, and lumpia wrappers are carefully measured to ensure quality with every purchase. Its recipe was carefully studied to produce the crunchiest and most full-flavored turon with langka to serve as as flag-bearer of SM Markets’ ready-to-eat offerings.

SM Markets’ reinvention of the turon ensures the right proportions of banana, langka, sugar, and crunchy wrapper in every bite.

The turon’s success has inspired the creation of other affordable offerings including rice meals, filled pandesal, lumpiang togue and siopao.