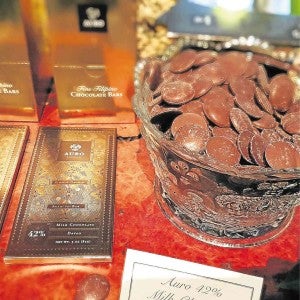 Auro offers retail bars and coin and couverture versions of its chocolates for industrial bakers.

I have been hearing a lot about different Filipino chocolate brands like Risa and Malagos, but this new player, Auro Chocolate, is taking chocolate making in the Philippines to a whole new level.

Partners Mark Ocampo, a former advertising and marketing specialist based in Chicago, and Kelly Go, a culinary graduate of Le Cordon Bleu in Paris, are bringing single origin Davao chocolate to Manila and the world.

But unlike other chocolate makers or chocolatiers, they don’t just buy wholesale cocoa beans from Davao to create retail chocolate, they have made it their mission to elevate Davao cacao to world’s best standards to produce chocolate that can compete with the world’s best.

It all started a little over five years ago. Mark and Kelly were in Chicago and noticed that Askinosie, one of the top bean-to- bar chocolate makers in the United States, uses Davao origin cocoa in their bars.

They had a eureka moment and thought, why don’t WE make chocolate using beans from Davao?

They could have simply purchased Davao beans in bulk to make chocolate bars, package them nice and cute, and sell these as artisanal.

But these two proved to be nerds (the good kind), not just touching the surface of chocolate making but going deep into the hows and whys of the craft.

They were not without help. In 2010, Kelly’s mom, the charming Jackie Go, sent Nieva Corneja to Davao to explore the cacao situation in the area. A few years later, Kelly and Mark themselves visited the various farms in Davao. Here they realized a few issues.

First, there is generally no distinction as to bean quality. All cocoa beans, with no regard as to type, origin or variety, are combined, weighed, bagged, then sold to traders. Second, farmers lack the know-how on fermentation and drying so this is done by traders who jack up the prices of cacao, and make more money than the farmers.

So Mark and Kelly, as they partnered with co-ops and individual farmers, created a technical support team that helps educate farmers on drying and fermenting the beans and in improving the overall quality of cacao.

They have also started buying directly from farmers, creating a pricing scheme that encourages the production of quality beans. For every ton of cacao, they do a random sampling of 500 beans. The lower the number of defective beans, the more the farmers earn, encouraging the production of better quality cacao.

At this point, a couple of years ago, the partners were in Davao at least three times a month, visiting farms in Davao del Sur, Davao Oriental and Tagum. “We’ve been to every area where cacao is planted in Davao,” Mark shares.

Then they did their research on how to make the best chocolate in the world, traveling around Europe to pick up chocolate-making techniques. They took courses in Zentralfachschule der Deutschen Süßwarenwirtschaft (ZDS), “the Academy of Sweets” in Germany, to learn the technical know-how in making good chocolate …

And here’s the best part: They invested in industrial chocolate-making machines from Germany as well, from Buhler and Netzsch. Today, their plant housing these machines is in Laguna. And they have the capability to produce a ton of chocolate a day.

The quantity of production, considering that Auro also wants to export its chocolates, has made it necessary for them to ensure that they won’t run out of supply of those quality single origin Davao beans. So they have partnered not only with co-ops but with over 2,000 cocoa farmers in Davao. And to ensure that those beans will always be available, i.e., sustainable, they have been working closely with the farmers to control quality and encourage production at the farm level.

Last week, they finally launched Auro Chocolate. They will have a showroom just off Paseo de Magallanes at the Fabtech Building. They offer retail bars with 33 percent white chocolate, 40 percent milk chocolate, 55 percent, 64 percent (my favorite) and 77 percent dark chocolate.

Then there are coin and couverture versions of the same chocolates for industrial bakers. And they also have chocolate liqueur and cocoa nibs.

All this while empowering agricultural communities in Davao and encouraging a level of production that our country can be truly known for.

Mark explained that while the Philippines has a production level of 5,000 metric tons of cacao, Indonesia has 200,000 (thereabouts). How behind are we?!

Hopefully not for long. Mark is only 28 and Kelly is 27. By the time they are 30, we may already be the leading producer of cacao in Southeast Asia.

What an amazing duo, these two entrepreneurs! Conquering the world one Auro nib at a time!