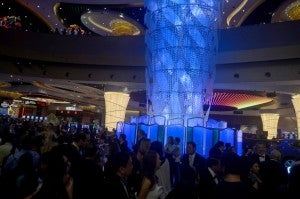 Tourist and casino players arrive at the grand opening of the City of Dreams mega-casino in Manila on February 2, 2015. Six gleaming golden towers surrounding a giant egg-shaped dome opened as the Philippines’ newest playground for the obscenely rich on Feb. 2, dwarfing the capital’s vast slums. AFP PHOTO/JAY DIRECTO

Net profit for the first three months stood at P148.6 million, a turnaround from the net loss of P1.136 billion in the same period last year, the local unit of Macau casino giant Melco said in a regulatory filing.

Local stock brokerage COL raised its fair value estimate on MCP to P10.96 per share, citing this as “one of the main beneficiaries of the growing gaming industry.” It noted that the “outperformance” in the first quarter was due to “higher-than-expected gross gaming revenues.”

A casino’s “win” or “hold” rate is based on the element of luck but is also affected by gaming limits, a player’s skill and resources and amount of time spent in the casino. While it’s often said that the house always wins, sometimes it wins more and sometimes less than the statistical probability.