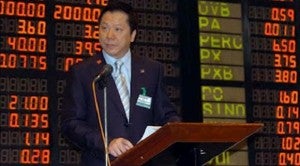 Gross gaming revenues for the quarter declined to P5.26 billion compared to P5.57 billion in the same period last year, which the company attributed to a lower VIP (very important person) or high-roller “win” rate that in turn negated the increase in revenues from the non-VIP segment.

The “win” rate refers to the portion of bets that the house wins.

Across the parent conglomerate AGI, consolidated revenues went up by 2 percent year‐on‐year to P33.7‐billion. Excluding minority interest, AGI’s net income to owners stood at P3.6 billion, up by 7 percent from the previous year.

“The various businesses within our group continue to evolve to ensure a more stable business platform that is capable of capturing the country’s economic growth waves,” AGI president Kingson Sian said.

”Backed by our previous and ongoing strategic investments, AGI now enters a new phase of development, with all of its subsidiaries better positioned to post quality earnings, and capable of sustaining their momentum over a long cycle.”

Golden Arches Development Corp, which holds the exclusive franchise to operate restaurants in the Philippines under the “McDonald’s” brand, expanded its first quarter net profit by 42 percent year-on-year to P271 million. This was on the back of a 13-percent growth in sales revenues to P5.9 billion.

Revenue growth was driven largely by the 5-percent improvement in systemwide same‐store‐ sales, new store additions and operating leverage. The company ended the first quarter with a total of 526 stores throughout the country, compared with 484 stores in 2016.

For its part, Travellers’ total revenues eased to P5.82 billion from P5.93 billion in the previous year. While gaming revenues slopped, non-gaming revenues increased by 9 percent year on year, ending the quarter at P1.1 billion. This was attributed to improved earnings from the meetings, incentives, conferences and exhibitions/events (MICE) business of Marriott Grand Ballroom and additional hotel rooms of the Marriott West Wing.