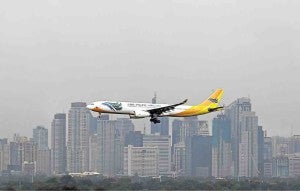 The increase in expenses, however, outpaced the growth in revenues.

The group incurred operating expenses of P14.3 billion for the three months, rising by 20.3 percent year-on-year.

“The increase was primarily due to the rise in fuel prices in 2017 coupled with the weakening of the Philippine peso against the U.S. dollar..,” Cebu Air said in a regulatory filing.

A weaker peso increases the cost of importation, such as of fuel and capital goods.