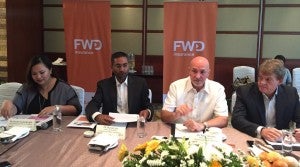 This is seen in line with its aspiration to be among the top five players in this Southeast Asian market by 2019.

This in turn allowed FWD to improve its Philippine market share from 1 percent to 1.7 percent while its share of the variable unit-linked (VUL) business rose to 2.3 percent. FWD also ended 2016 – its second full year of operations – ranking 12th among its peers.

“Despite the slight overall industry downturn, FWD continued to grow by focusing on our vision and core operating strengths, leveraging technology and business and product innovation as our primary growth drivers,” Grimes said.

FWD ended last year with about 20,000 in client base, which has further grown to over 30,000 to date, Grimes said. About 50 percent of Philippine customers comprised of people who are 40 years old or younger.

“Our takeout of that is we are reaching a broad set of demographics but the message we’re coming out with is having resonance with a young group of Filipinos, which is effectively the millennials,” Grimes said.

Despite being a newcomer in this market, FWD sees more room to grow in the Philippines given the very low penetration of insurance in this country. To date, FWD has the highest level of paid-in capital among insurers in this country at P2.3 billion.

Last year, FWD’s agency force expanded to almost 1,900 from 1,400. After hatching a bancassurance deal with Security Bank on the cross-selling of life insurance products in bank premises, it has also deployed about 150 insurance advisors covering about half of the bank’s 300 branch network.

John Johnson, FWD Philippines’ chief distribution officer, said some branches of its bancassurance partner may need more than one advisor while some branches may not need any.

In its early years into this market, Grimes said FWD was generating bulk of business from the bancassurance platform as FWD was still building an agency force from scratch. Now that a quality agency force had been organized, he said this would significantly contribute to total business.

Last year, FWD launched its e-commerce and corporate care channels, thus creating a multi-channel business in line with its goal of offering innovative and convenient solutions. The company also reported that it had deepened its range of digital offerings.

Likewise part of the plan its to broaden its product range to introduce more protection-based products. While it had previously focused on VULs where majority of Filipino clients are drawn to, FWD intends to offer traditional yet innovative protection products.

VUL, a hybrid between a mutual fund and life insurance, becomes variable as investment returns depend on the market performance of the fund where the premium is invested. The performance of the separate accounts is not guaranteed and in case of adverse market conditions, the value of the policy could be less than the capital investment subject to any specified minimum guarantees.

FWD recently offered a new life insurance plan called “Set for Health” that provides protection against 57 critical illnesses and – as a unique feature, allows claims for up to three unrelated illnesses as well as a return of premium at age 75 if the insured person does not make any critical illness claim. FWD also offered the “Peace Plan” which offers guaranteed financial protection against acts of terrorism anywhere in the world.

In the future, FWD isn’t ruling out entering new businesses such as offering mutual funds or even getting into the non-life insurance business.

‘They are making up stories’: Cayetano camp denies insulting Velasco before Duterte