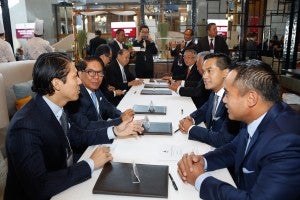 Century Properties Group (CPG) has teamed up with Indonesian conglomerate Bakrie to develop three master-planned estates in the Philippines – a Media City, a Sports City, and a Technology Corridor – in a bid to strengthen the tourism and media technology sectors of both the Philippines and Indonesia.

The agreement sets the stage for a mutual sharing of resources, from allocating capital investments to the exchange of expertise and skills to embark on these projects.

As part of the agreement, CPG will seek to provide the land for the three themed master-planned projects.

The memorandum of understanding among the parties was signed on April 28 at the sidelines of the Association of Southeast Asian Nations (ASEAN) Summit. This partnership is seen setting the stage for future collaborations within the ASEAN countries.

Media City is envisioned as a mixed-use development that will host a state-of-the-art multi-media content development center. It is also planned to have residential, retail and other commercial components.

Sports City is planned to offer multiple sports complexes in the country for use by the general public.

The Technology Corridor is envisioned as the Philippines’ own version of California’s Silicon Valley. It is planned to enhance bilateral technology transfers between the two countries, as well as serve as a hub for the country’s tech-centric brain pool.

For Revolution, the deal includes supplying designer homes, hotel villas, and amenity space to Bakrie Global’s property affiliates in Indonesia. There are 3,000 hectares of land, owned and developed by the Bakrie Group, totaling $1.1 billion for the residential and villa component alone.

The partnership is seen to allow Revolution to diversify into producing highly functional and customizable spaces. As part of the signed agreement, Revolution will look to supply five mega studios and five hectares of office spaces and storage facilities to Bakrie Global’s Mediapolis studio project in Jakarta, which shall represent Indonesia’s strong commitment in Creative Industries and advanced broadcasting technologies.

Bakrie Global, for its part, agreed to lend the expertise and resources of its telecommunications, media and technology arm Visi Media Asia, Indonesia’s fastest growing integrated media company, to be involved in the aspects of broadcasting, programming and content creation in Media City for distribution in the Philippines and Indonesia.

“I am very pleased to have this framework of collaborationwith Bakrie Global of Indonesia to develop the Philippines’ first-ever Media City, Sports City, and Technological Corridor. This kind of synergy will help build the Philippines’ competitive edge as a tourism and hospitality destination with modern media and tech capabilities, as well as open a host of opportunities for business and employment,” CPG chair and chief executive officer Jose E.B. Antonio said.

“I am extremely proud to start this partnership with Century Properties Group and Revolution Precrafted, two very innovative companies from the Philippines that share the same vision with Bakrie Group in promoting industries through the creation of relevant developments that address the demands of the times. We look forward to advancing these goals while contributing to the nation-building of our respective countries,” said Bakrie Global Ventura CEO Anindya Novyan Bakrie.

“In its thrust to grow and expand its business from custom precrafted designer homes to creating meaningful public spaces, Revolution Precrafted is fortunate to bring these three companies together to forge this multi-faceted synergy and cooperation for real estate, technology, sports and media. We look forward to this collaboration with one of Indonesia’s largest conglomerates and the Philippines’ most innovative property company,” said Robbie Antonio, CEO of Revolution Precrafted Properties Limited.

Revolution delivers high-design structures such as modular homes, prefabricated stations and buildings, as well as pop-up retail and fitness centers designed by 53 of the world’s best designers, brands and Pritzker prize architects. It recently, raised seed funding from the world’s most prolific venture capital firm, 500 Startups at $256 million valuation.