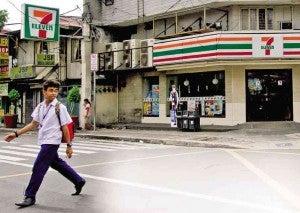 Store count by last yearend reached 1,995, expanding by 393 stores or 24.5 percent from the level in the previous year.

There were 1,633 7-Eleven stores in Luzon, 808 of which are in Metro Manila while 255 are in Visayas and 107 in Mindanao. Franchisees control 55 percent of total stores while the remaining 45 percent are corporate-owned stores.

“We continued to dominate the convenience retail sector by opening new stores all throughout the country. We capitalized on our first-mover advantage and economies of scale in widening our lead against competitors. The capacity building expenditures we made in the form of establishing new distribution centers and regional headquarters are starting to produce favorable results,” PSC said in a disclosure to the Philippine Stock Exchange.

“We aim to further expand our product offering, remodel existing stores and implement our market development plan over the next five years to enable us to achieve new milestones. We shall take advantage of the improving economy and changing consumer preference towards innovation and convenience, and this shall serve as our guide in the continued pursuit of our vision of becoming the best retailer of convenience for emerging markets.”

On the other hand, average net margin eased to 4.1 percent last year from 4.5 percent in 2015. For the fourth quarter of 2016 alone, net margin stood at 7 percent compared to 7.4 percent in the previous year.

For this year, PSC has budgeted capital expenditures amounting to at least P3.5 billion to support its store expansion strategy. Bulk of the amount is allocated to new store opening, store renovation and equipment acquisition.

PSC acquired from Southland Corporation (now Seven Eleven Inc.) of Dallas, Texas the license to operate 7-Eleven stores in the Philippines in 1982. The retailer debuted on the Philippine Stock Exchange in 1998.