My sister, my business partner

Sisters are special because they share a common childhood and pride of family and were brought up with the same values, attitudes and social norms. Sisters can be each other’s best friend and harshest critic.

For these reasons, says Dr. Herminia Fajardo, Trustee of the Small Enterprises Research and Development Foundation (SERDEF), sisters can make the best business partners, as long as they play to their own strengths and let their siblings play to theirs.

Three sets of sisters I interviewed agree. They know, from experience.

Golden Tri-bloc Inc., franchise owner of Dunkin’ Donut for the province of Rizal, began as an initiative of couple Enrique and Pilar Lee. It opened in 1991 with one commissary and one store in Cainta. Today, after 25 years selling donuts, it now has 60 outlets and two commissaries in Rizal, San Juan, Marikina and southern Cavite.

Pilar reveals the key to their phenomenal growth: A good relationship with their customers and franchisor, Golden Donuts Inc.

The early years were tough. To start growing, they needed an infusion of capital. For this reason, Pilar’s sister, Liza, was invited to join in.

Liza recalls it wasn’t hard to agree to partner with the couple. A past business venture in RTW with her achi showed they work well together.

Sisters in business trust each other implicitly, Pilar says. “But the greatest advantage in partnering with a sister is having the same mindset, management philosophy and ideals in dealing with people. We saw how our parents worked hard in their business and treated people fairly. Growing up, we spent vacations helping out in our grocery store and pawnshop in Cotabato.”

There is a neat delineation of tasks in their company.

Enrique and Pilar, CPAs both, handle money matters, while Liza is more involved in daily operations.

There had been knots in this sister act, to be sure, stemming from a difference in people management style.

In an impasse, they run to a final arbiter: Enrique, who can always be trusted to think dispassionately.

Pilar and Liza are also partners in five telecom stores as premium dealers of Globe Telecom Inc. They are both active volunteers in the Philippine Red Cross and are patrons of several orphanages and homes for abused girls.

Their parents instilled in them the importance of caring for each other, as well as for the less fortunate. 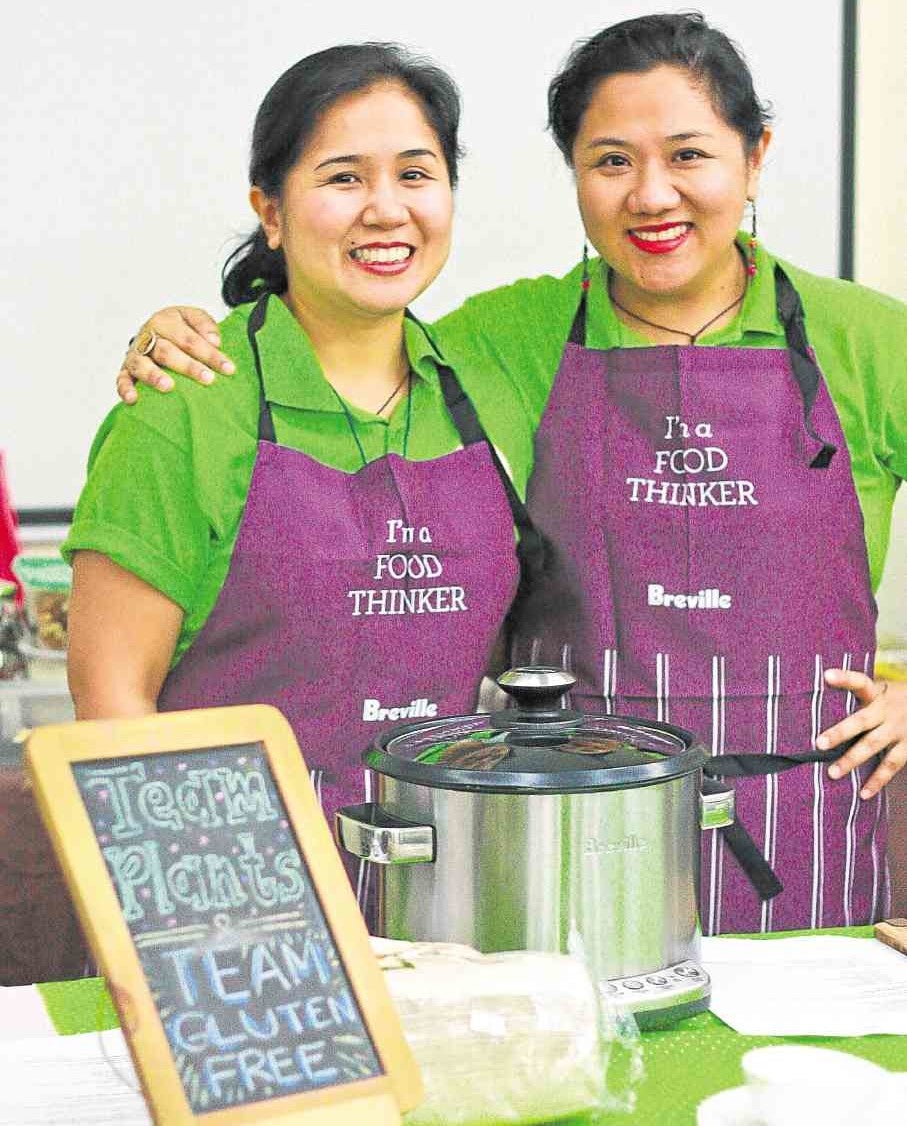 Jertie (left) and Jaclyn Abregas are at home in their kitchen

Two sisters’ personal quest for better health led to the putting up of Jertie’s Kitchen in 2011.

The idea took seed in Jertie’s mind as she watched and helped Jaclyn fight polycystic ovarian syndrome and the beginnings of diabetes through, among others, a healthier diet. Two years after removing meat from her intake, Jaclyn wasn’t only able to overcome the disorders, but also lost unwanted weight and gained energy. Amazed over the positive changes in her sister, Jertie slowly shifted to the vegan way, stepped up when she discovered she was gluten-intolerant.

Jertie’s Kitchen grew out of the sisters’ desire to share their advocacy. At first, it offered only two vegan products, aside from pastries. Soon, it was rebranded to become a specialty gluten-free and vegan food business. It held workshops to promote the eat-healthy lifestyle.

Today, Jertie’s Kitchen is the go-to place for people with specific health problems but who want to enjoy their food.

Jaclyn attributes their growth to a more focused marketing effort.

“We used to join general-themed events, without much success. We learned in time to concentrate on specialized bazaars visited by our target market. Once we did that, we met people who needed us as well as those who didn’t know they needed us,” she says.
Having a shared advocacy has injected commitment into the partnership, according to Jaclyn.

“We know each other’s strengths and weaknesses and know how to temper each other when one goes overboard,” she says.

A downside in a sibling partnership is living in the same house and sometimes tiring of seeing each other 24/7.

It is also hard to turn off shoptalk when they are supposed to be relaxing at home.

Adds Jertie: “Though we have a common advocacy, we sometimes are at odds in how to approach problems. We’re working on our communication skills to make it easier to resolve differences.”

It helps that responsibilities are well-defined. Jertie handles production, operations and finance while Jaclyn takes care of marketing, administration and R&D.

The sisters also share an enterprising childhood. They made ice candy, rented out books, sold hand-made jewelry. A full-fledged business was a matter of course.

Ever since she can remember, Mayumi (Ayi) Arquero had always wanted to be an entrepreneur, but she had limited skills and resources then to use in a business.

She found employment in a big travel agency where she rose up the ranks to manager. She learned she had selling and communication savvy as well as a passion for quality service. She earned the trust of clients.

In August 2015, after a period of praying over her business plans, she felt that God was telling her to take the plunge.

She invited younger sister Luz (Babes) with whom she shared an entrepreneurial bent to be her partner. Babes had ventured into business, but she dropped it because it took her away from her children, who were very young then.

Besides, Ayi says, “I wanted a partner who is trainable, open-minded, humble and ‘hindi mareklamo.’ Babes is all that.” She trained her sister on the job.

Babes brought into the office her sunny disposition and sense of humor, so that “there is no dull moment with her.”

Babes says of Ayi: “When I was a young student, she was the one who tutored me. I have all respect for her competencies and work and personal ethic.”

AdonaiStar did not have to tough it out to attract an initial market. Previous clients from Ayi’s former office sought her when they found out she had her own agency. Clients usually become repeat clients, referring their friends and relatives to AdonaiStar. Through word of mouth, the fledgling company grew.

A sister enjoys your trust, says Ayi. You have peace of mind knowing your partner will always be loyal.

Babes appreciates that Ayi gives her utmost consideration at work, even pushing her to take the day off when one of her kids is sick. “She insisted we set up shop near where I live so I save on travel time. Thus, I can tutor my children during slack time and even go home for lunch. It’s great to partner with someone who loves your children as much as you do.”

For the Arquero sisters who seem to have a special bond between them, there is no downside to their sister act. —CONTRIBUTED

For more entrepreneurial stories, visit the SERDEF website at www.serdef.org.

Read Next
Malunggay tea drink gets boost from mothers
EDITORS' PICK
Rare earth metals at the heart of China’s rivalry with US, Europe
PNP, PDEA destroy P25.8M worth of marijuana in Kalinga
Kai Sotto continues to inspire Filipinos by sharing his passions and stories with Smart Prepaid
Alex Eala wins Grand Slam on Independence Day: ‘I hope I made my contribution to the country’
G7 rivals China with grand infrastructure plan
Ahead of ONE: Full Blast II, Mongkolpetch warns Elias Mahmoudi: ‘Watch out for my fists’
MOST READ
Chel Diokno, Bro. Eddie, Ate Vi decline 1Sambayan 2022 poll nomination
1Sambayan names 6 choices to pit vs Duterte’s anointed in 2022
Groups slam Duterte ‘surrender’ to China
G7 rivals China with grand infrastructure plan
Don't miss out on the latest news and information.