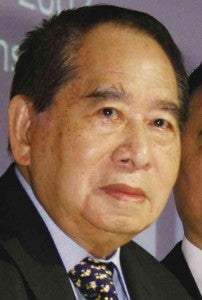 MANILA — Fourteen Filipino tycoons, again led by the SM Group’s Henry Sy Sr., were among the richest individuals on the planet, according to the 31st Forbes’ World’s Billionaires list.

More Filipinos made it to this year’s index, compared to 11 in 2016, as the Philippines ranked among the fastest growing economies in the region. For 2017, Forbes Magazine counted 2,043 global billionaires, a 13 percent increase.

According to Forbes, Henry Sy Sr., whose SM Investments Corp. controls the country’s largest banking, shopping mall and retail businesses, had a net worth of $12.7 billion.

Sy, at 92 years-old, remained the only Filipino among the world’s 100 wealthiest people.

He was followed by John Gokongwei Jr., who had a net worth of $5.8 billion. The Gokongwei family controls JG Summit Holdings Inc., a property, airline, food and beverage conglomerate. It also has interests in the country’s biggest electricity retailer, Manila Electric Co., and telecommunications giant PLDT Inc.

The third richest in the country is Lucio Tan, with a fortune of $3.7 billion. Tan’s LT Group is in beverages, banking, tobacco and real estate. Tan also owns Philippine Airlines, the region’s oldest commercial air carrier.

The remaining Filipino billionaires who made it to this year’s list:

Read Next
ASEAN urged to deepen trade integration
EDITORS' PICK
World-standard accounting: Unlocking your financial potential
Defend Your Health! Shop health essentials from home with Rose Pharmacy’s Online Sale
Chatting with companions, answering calls on MRT 3 trains banned
Water remains our saving grace right now
COVID-19 wards in 2 more hospitals reach full capacity
Navotas will be on lockdown from July 16 to 29 – Tiangco
MOST READ
‘I am not my father,’ says daughter of lawmaker who voted to deny ABS-CBN franchise
In slap on face of PH, China replies to Locsin on tribunal ruling: It’s invalid
Vilma Santos-Recto ‘prepared’ to face ‘consequences’ over ABS-CBN franchise vote
Did a meme get on Agot Isidro’s nerves? She’s asking ’24 Oras’ to fact-check it
Don't miss out on the latest news and information.