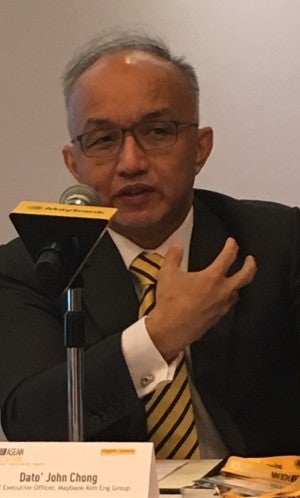 SINGAPORE- Amid concerns on rising protectionism, it’s imperative for the Association of Southeast Asian Nations (ASEAN) to focus on “building bridges” and deepening trade integration in order to boost the resilience of this 10-member economic bloc, the chief of regional investment powerhouse Maybank Kim Eng Group said.

In a press briefing on Tuesday during the group’s “Invest ASEAN” forum, Maybank Kim Eng chief executive officer Dato John Chong said that the Southeast Asian region was being supported by an underlying narrative of strong infrastructure spending – estimated to sum up to US $600 billion from 2016 to 2020 – alongside a 630-million population mostly comprising of young people.

This year, Maybank Kim Eng expects its six core ASEAN markets (ASEAN-6) – Malaysia, Singapore, Indonesia, Thailand, Philippines and Vietnam – to grow by 4.8 percent, picking up from 4.6 percent last year. Chong said the momentum would be driven by trade recovery, rebound in commodity prices and improving global electronics demand. Next year, ASEAN-6 is seen to sustain a growth of 5.3 percent.

In the case of the Philippines, Maybank Kim Eng expects gross domestic product (GDP) growth to remain strong at 6.4 percent this year and 6.5 percent next year after eking out 6.8 percent last year, which however included an extraordinary boost from the presidential elections.

Within ASEAN-6, the Philippines is seen to post the fastest pace of growth this year and next year, followed by Vietnam which Maybank Kim Eng expects to grow by 6.3 percent this year and 6.2 percent next year.

In terms of foreign direct investments (FDIs), Chong noted that intra-regional FDIs had posted a compounded annual growth rate of 11 percent from 2008 to 2015. In 2015, he pointed out that intra-ASEAN FDIs had surpassed FDI inflows from the European Union, Japan and the US.

In the Western world, Great Britain’s decision to exit the European Union, popularly called “Brexit,” and America’s election of a populist and isolationist new president Donald Trump have triggered concerns across the globe. The concerns reverberate especially across Asia’s emerging markets, which have greatly benefited from globalization over the decades.

But as a whole, Chong noted that ASEAN had a strong balance sheet and had become less dependent on the US, with exports to China having surpassed exports to the US since 2009.

“Unfortunately, where we can do better is intra-regional trade. It’s still at 24 percent (of the region’s total trade). That means we trade more with non-ASEAN partners than we do with ourselves,” Chong said, noting that this number had remained relatively unchanged since 2007.

“If we do this, there will be greater resilience and less volatility in ASEAN,” he said.

Chong said building bridges and deepening integration won’t just be the burden of the governments.

“It also has to be about the private sector and corporates as well. We need to step up to be ASEAN multinationals. In effect, we need to be doing business not just in our own country but also in other countries within ASEAN,” he said.

Over the years, Chong said more and more corporations from Malaysia, Singapore, Thailand and the Philippines were now expanding their regional footprint.

As whole, Maybank Group – which has banking operations in all 10 countries in the region (aside from operating investment houses in ASEAN-6) – itself is being pitched as a proxy to the ASEAN region.

Outside of ASEAN-6, the economic bloc also includes the wealthy state of Brunei as well as the three new frontier markets such as Cambodia, Myanmar and Laos.

At the 2017 Invest ASEAN forum, Maybank Kim Eng brought together 49 corporations of varying sizes to explore opportunities in this region as well as to share insights into the geopolitical, business and technological trends that could shake up the ASEAN landscape. These corporations have a combined market capitalization of $129.7 billion.

The Invest ASEAN forum attracted over 800 delegates, which also included representatives from 126 funds across the globe with $18 trillion in assets under management.