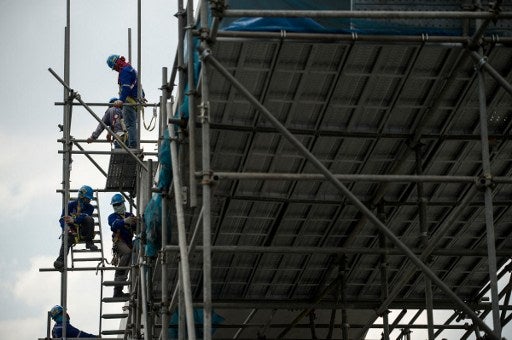 Workers are seen on scaffolding at a construction site for an expressway in Manila on March 8, 2017.
Desperately needed airports and trains are part of Philippine President Rodrigo Duterte’s envisioned “golden age of infrastructure”, but graft, red tape and other perennial problems threaten the 170-billion USD plan. AFP PHOTO

Unprecedented influxes of money from China and Japan are key planks of the hoped-for building frenzy, which aims to rectify decades of underspending that has been one of the main anchors on the Philippine economy.

Decrepit light rail lines in the capital of Manila, which snake above ever-worsening traffic that has come to be known as “Carmageddon”, are among the most obvious symbols of the infrastructure problems.

“The city is really suffering now from lack of mobility, not only in terms of mobility, it’s really the total absence of infrastructure,” Duterte said last week as he described Manila as “decaying”.

Duterte and his aides have repeatedly said the six years of his administration will be the “golden age of infrastructure”, with a record $168 billion to be spent on 5,000 projects across the nation.

If the plans come to fruition, infrastructure spending would reach 7.2 percent of the gross domestic product by 2022, when Duterte is due to step down — a huge increase from 1.8 percent in 2011.

The Philippines ranks 95th out of 138 countries for quality of infrastructure, and behind most of its Southeast Asian neighbors, Japanese-based financial services group Nomura said in a recent report.

It said the lack of infrastructure was a huge drag on economic development, citing a Japan International Cooperation Agency estimate of traffic costs in Manila alone as equivalent to four percent of GDP.

Infrastructure spending started to rise during the administration of Benigno Aquino, who stepped down last year, but his much more ambitious plans were curtailed by many problems that will also confront Duterte.

“Financing is the least of the problems,” transport and infrastructure consultant Rene Santiago told Agence France-Presse (AFP), pointing to an abundance of government funds plus cashed-up local businesses and eager foreign investors.

“The biggest obstacle is the implementation capacity of the government infrastructure agencies.”

Santiago, chief executive of Manila-based business consultancy Bellweather Group, said the government did not have enough personnel with the capabilities or experience to oversee such a massive spending plan.

Another major issue is corruption.

Aquino was heavily criticized in some quarters for not spending more on infrastructure, but he said he had to slow down the contract-awarding process in an effort to increase transparency and minimize graft.

About 10 to 30 percent of an infrastructure project’s cost is typically lost to corruption, according to Vincent Lazatin, executive director of the Transparency and Accountability Network in Manila.

Lazatin said this rose to 50 percent when congressman were directly involved in allocating national funds in a system known as “pork barrel”.

In a massive corruption scandal unearthed during the Aquino administration, 200 lawmakers were implicated in such scams. But, as part of an infamous “culture of impunity”, few have been brought to justice.

Lazatin warned that infrastructure projects financed by foreign partners would also be vulnerable to corruption.

“It is in the negotiation process (between the Philippines and the donor nation) that deals can be made that are off the books,” Lazatin said.

Duterte has made China one of his top targets for loans and investments. He visited Beijing last year and said he returned with commitments for $15-billion worth of projects.

Chinese contracts for a $593-million railway project in 2003 and a $300-million national broadband network in 2007 negotiated under then-president Gloria Arroyo had to be cancelled because of corruption scandals.

In a speech at an economic forum last month, Chinese ambassador Zhao Jianhua acknowledged graft would again be a concern.

“We will try to make sure these projects are going to be corruption-free,” Zhao said.

The Philippines’ legal system is another major problem, with projects often held up due to lawsuits filed by losing bidders, according to Dindo Manhit, head of economic and political think-tank the Stratbase group.

“The reality of our democratic process is in our rules on public bidding, there are always bidding groups who if they do not win, they try to find other ways (to get the contracts),” Manhit told AFP.

In its report Nomura also cited a host of bureaucratic bottlenecks, including “opaque regulatory framework or political intervention”, as problems in the country’s infrastructure program.

But it said the government was focused on finding solutions and there was reason for optimism.

“Even if partly successful, we believe the government’s ambitious infrastructure program would have significant implications for the economy,” it said.