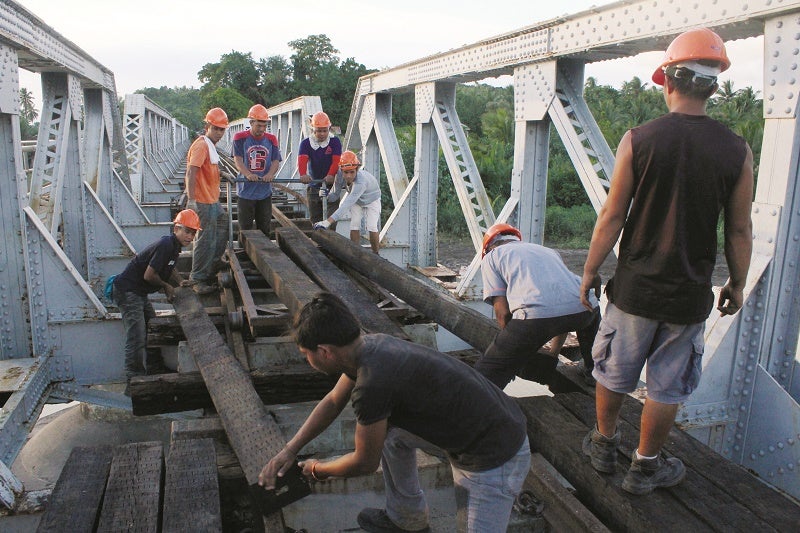 Railway projects are among the biggest items on the infra list. PHOTO BY JUAN ESCANDOR / INQUIRER SOUTHERN LUZON

The Duterte administration gets plenty of attention—positive and otherwise—for its aggressive war on drugs.

But lesser known is an aggressive plan to combat poor infrastructure that has hobbled economic growth for years.

More details here were shared under the economic team’s “build, build, build” banner that was unveiled in late 2016.

In a relatively smaller scope outside transportation, there were also projects to address flooding, water supply, school infrastructure, healthcare, prison quality and power.

The biggest items involve the railway sector, the lion’s share of which will be built in Luzon.

The DOTr earlier said there were more than a dozen train projects worth over P1 trillion.

This included modernizing, upgrading and increasing the capacity of the Metro Rail Transit Line 3 and extending the Light Rail Transit Line 1 to Cavite, being undertaken by a consortium led by Metro Pacific Investments Corp. and Ayala Corp.

New projects lined up for Luzon were the LRT Line 4, a 19-km line from Taytay Rizal to Ortigas Avenue; LRT Line 6, a 19-km train from Niyog, Cavite to Dasmariñas, Cavite; the 35-km PNR North Commuter line from Tutuban to Malolos, Bulacan and another 55-km PNR North extension from Malolos to Clark, Pampanga.

PNR South Line running 72-km from Tutuban to Los Baños, Laguna and LRT-2 East and West extension lines are also on the list.

The DOTr cited “Line 5a,” a railway “spur line” to the Makati central business district which would use an existing tunnel. In Cebu, there would be a 25-km rail project costing P98 billion; a 25-km Central Philippine Rail worth P86 billion, and a 2,000-km Mindanao Rail project.

There’s also a proposed Manila-Clark (Pampanga) railway, which will “guarantee” one hour travel time from the capital district to Clark Airport.

Already under construction is the P71-billion MRT-7 line that will link Metro Manila (Quezon City) to Bulacan. This would be finished by 2020 and will be operated by San Miguel Corp.

The DOTr said most of the projects would be done or partially opened during the term of President Duterte.

There was also a proposed 14-kilometer subway line linking business districts in Metro Manila. But this would be finished beyond 2022, when Mr. Duterte’s term ends, the DOTr said.

The DPWH and Bases Conversion and Development Authority also outlined some road projects.

Metro Pacific is also starting the Cavite Laguna Expressway this year, with completion seen by the end of 2019.
The government, meanwhile, said it would pursue a Bus Rapid Transit project.

In September 2016, the board of the National Economic and Development Authority approved the P38-billion Metro Manila BRT project.

The BRT has defining features, the core of which is a dedicated bus lane, with specialized buses and stations. Buses, for example, would have the same height as station platforms, speeding up the boarding and unloading process.

The BRT, which would occupy Edsa’s center lanes, would replace buses in the yellow lanes on the rightmost lanes of the major thoroughfare.

The DOTr said the plan was expected to cut road congestion significantly, and in a more cost-efficient manner, as the BRT has done in dozens of other cities around the world. (A BRT project in Cebu is due for completion in 2019).

The DOTr also listed a cable car system project. Potential locations would be along Pasig River, Boracay and Baguio.

Approved by the Neda board in September, this PPP has yet to be officially rolled out to participants, despite the high-level of interest from big conglomerates.

There is also the P108-billion PPP deal to modernize, develop and operate the Bacolod-Silay, Iloilo, Davao, Laguindingan, and New Bohol air gateways.

The current administration, in a surprise move, decided to bid out the airports individually instead of in packages comprising several airports—delaying the process further.

The DOTr also wants to modernize Clark International Airport, while relocating general aviation services to either Clark or Sangley Point in Cavite. This would help decongest Naia, which is now operating well beyond its intended capacity.

On the maritime sector, the Philippine Ports Authority will scrap the P19-billion Davao Sasa modernization project. Instead, it will pursue a down-scaled version worth about P4.9 billion.

The administration is likewise planning to revive the Pasig River Ferry Service and the broader roll-on, roll-off service for inter-island travel around the country.

A number of projects under the PPP framework are slated for deployment.

As of Dec. 15, 2016, the PPP Center has outlined 38 projects in its pipeline, valued at P5.6 trillion. (The amount was mainly on account of the reclamation component of the Manila Bay Integrated Flood Control and Expressway, which is still under study).

Thus far, none of the PPPs under procurement that were left hanging by the Aquino administration have progressed during the Duterte administration.

As noted, delays or cancellations hit the regional airports PPP and Davao Sasa.

A number of PPP projects remain under study. These included the NLEx East Expressway project, Manila East Rail System, the Sucat Gas Power Plant and the rehabilitation of the National Center for Mental Health.

In a departure from the Aquino administration’s position, the President said his administration was willing to consider unsolicited proposals from the private sector. The country’s largest business groups are expected to come forward with new proposals, and many have already done so in recent months.

The groups of businessman Wilson Tieng and taipan Henry Sy Sr. are proposing to reclaim 2,500 hectares of land in offshore Sangley. The P1.3 trillion project would then serve as the site for a new international airport, seaport and industrial zone.