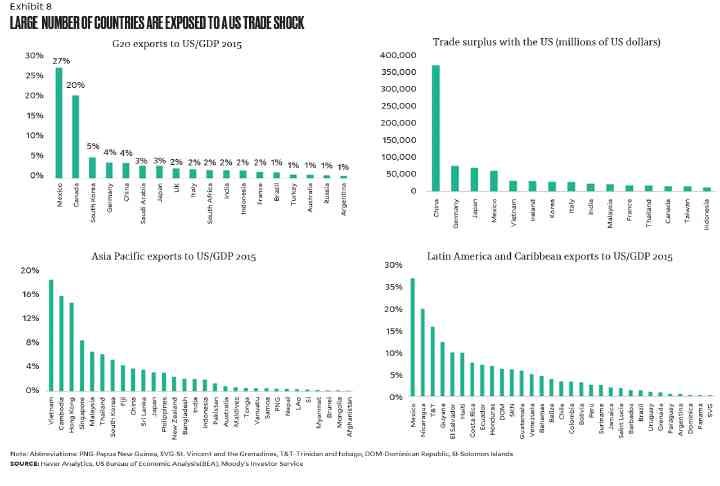 Moody’s Investors Service expects a continuing cyclical recovery in global economic activity with growth in G-20 countries picking up modestly to 3 percent in 2017 and 2018 from 2.6 percent in 2016, but potential shifts in US policy add uncertainty to this forecast.

“We note unusually high uncertainty around our global forecasts due to the wide range of outcomes that could arise from significant shifts in US policy on a number of domestic and international issues, including trade and immigration. However, our baseline view assumes that destabilizing economic and policy dislocations will be minimal,” says Madhavi Bokil, a Moody’s vice president and senior analyst.

“Specifically, we see four major systemic risks to our forecasts: 1) global economic risks associated with shifts in US trade; 2) risks to global financial markets and emerging market economies if US interest rates were to rise faster than anticipated and/or the US dollar were to appreciate sharply; 3) risks of a sudden and sharp deceleration in China, and 4) political and fragmentation risks in the EU and the euro area,” Bokil added.

Moody’s conclusions were contained in its just-released global macro outlook for 2017-18, “Modest Acceleration in the Global Economy, but Shifting US Policies Inject Uncertainty.”

As part of the risks to the outlook, on the trade front, large tariffs against specific countries with which the US has a large trade deficit, including China and Mexico, could potentially be inflationary and harmful for near-term growth as these were likely to be met with retaliatory actions.

Moody’s also sees a high risk of a significant protectionist shift in US trade policy, as was promised by President Trump during the election campaign, and which would inflict lasting damage to the global economy. It will also take some time for trade policy under the new administration to take shape and, to some degree, it will depend on the level of support from congressional Republicans.

In Asia, Moody’s said China’s economy stabilized around the official growth target of 6.7 percent in 2016, but would likely continue to decelerate to 6.3 percent in 2017 followed by 6 percent in 2018. The Chinese economy’s solid growth performance last year, in part through significant policy support, has further helped reinforce various positive dynamics, such as firming commodities prices, it said.

India is forecast to have the fastest-growing economy among all G-20 countries with growth put at 7.1 percent for 2017, down from a previous expectation of 7.5 percent because of the effects of demonetization. The Indian economy had slowed in the fourth quarter of 2016 due to the withdrawal of 86 percent of the currency in circulation —without an immediate replacement—in November.

Moody’s said it further expected that the US economy—which has entered 2017 with strong momentum— would get additional lift from a stimulative fiscal policy stance pushing growth above potential. Accordingly, Moody’s has revised its real GDP growth forecasts to 2.4 percent in 2017 and 2.5 percent in 2018, from 2.2 percent and 2.1 percent, respectively. This pace of growth will be sufficient to absorb the remaining slack in the labor market, further pushing up nominal wages and inflation.

Moody’s baseline forecast also assumes the US Federal Reserve will raise the federal funds rate by 75-100 basis points (bps) in three to four rate increases in 2017, provided the economy is not encumbered by other factors, especially economic policy uncertainty or missteps. That said, Moody’s expects the Fed to err on the side of caution and tolerate somewhat above-target inflation in the near term.