Cash sent by OFWs hit record-high $2.55B in December – BSP 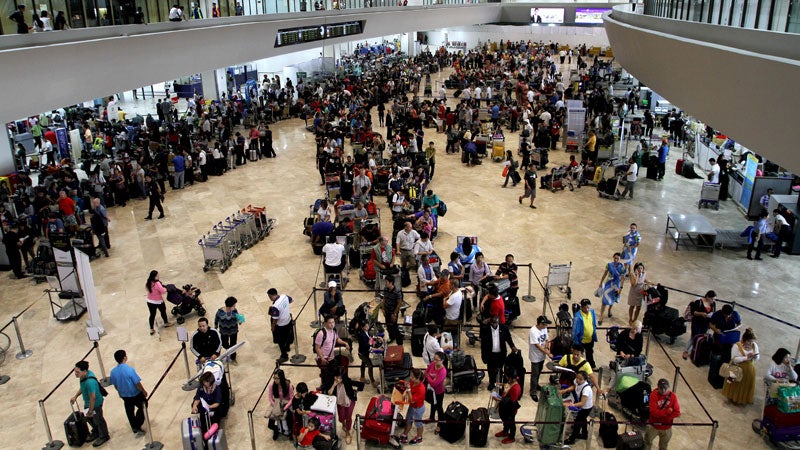 Thousands of Filipino workers leave every year for employment abroad, and their cash remittances have been a consumption driver in the economy. (INQUIRER FILE PHOTO)

MANILA — Cash sent home through banks by Filipinos living and working abroad hit a new record high of $2.559 billion in December last year on the back of an improving global economy, such that the end-2016 growth rate exceeded the government’s target.

The latest Bangko Sentral ng Pilipinas data released Wednesday showed that the cash remittances last December were the highest monthly inflow to date, and were up 3.6 percent from $2.47 billion during the same month of 2015.

In a statement, BSP Deputy Governor and officer-in-charge Diwa C. Guinigundo said the bulk of remittances that came in during the peak of the Christmas season were from Japan, Qatar and the United States.

As such, Guinigundo noted that that the increase in the amount cash sent back home by overseas Filipinos last year surpassed the 4-percent growth goal to $26.6 billion.

“Cash remittances in 2016 continued to increase on the back of improving global economic conditions,” Guinigundo said.

This “solid” growth in remittance flows “continues to be a major driver of domestic demand,” according to Guinigundo.  He said that personal remittances, which included non-bank transfers, accounted for 9.8 percent of the gross domestic product in 2016. The GDP grew by a robust 6.8 percent in 2016.

On the other hand, cash sent home by sea-based OFWs slid 3.8 percent to $5.6 billion in 2016. “This may have been due partly to stiffer competition in the supply of seafarers, particularly from East Asia and Eastern Europe,” Guinigundo explained.

In terms of geographies, Guinigundo said cash remittances from the Middle East jumped 12.7 percent last year due to higher amounts coming from Kuwait, Oman, Qatar and the United Arab Emirates.

From the Americas, cash remittances posted 3.8-percent increase, buoyed by the 6.2-percent growth coming from the US.

However, remittances from Europe dropped 8.4 percent in 2016, “owing to the decline in cash transfers from the United Kingdom (partly due to the depreciation of the pound sterling vis-à-vis the US dollar), Italy and the Netherlands,” Guinigundo said.

The top 10 sources of cash remittances last year, which accounted for over four-fifths of the total, were Germany, Hong Kong, Japan, Kuwait, Qatar, Saudi Arabia, Singapore, the UAE, the UK and the US.

For 2017, the BSP had projected another 4-percent growth in remittances.

Last week, the Washington-based Institute of International Finance (IIF) said that while the Philippines has been among the emerging markets seen the least vulnerable to external risks, looming protectionism in the US amid a Trump presidency could impact on cash remittances.

“US immigration restrictions will likely pose further headwinds to remittance flows, especially [to the] Philippines and Mexico,” the IIF said in a report titled “Emerging Markets Scorecard: Where are the Vulnerabilities?”  SFM