The plan for a P700-billion Bulacan Airport presented by the San Miguel Corporation to the Department of Transportation. (PHOTO FROM SMC PROPOSAL)

MANILA — Conglomerate San Miguel Corp.’s new international “aerotropolis” in Bulacan province would cost about P700 billion to build and can be completed within six years.

Those were some of the details revealed on Wednesday by Department of Transportation (DOTr) Undersecretary Roberto Lim, whose office has been reviewing SMC’s unsolicited proposal to build a new international gateway that will eventually replace Manila’s Ninoy Aquino International Airport.

Experts have agreed that a new airport serving Manila and nearby areas is needed, given that NAIA, which opened in the 1980s, has been operating well beyond its design capacity. Expansion options are also limited given its location within Metro Manila.

Details from Lim’s presentation showed perspectives of a massive airport and city complex covering about 2,500 hectares in Bulakan, Bulacan province. The project would rise along Manila Bay.

It was proposed under a build-operate-transfer scheme, with SMC to operate the airport under a 50-year concession.

The airport complex itself would span 1,168 hectares and would have as many six parallel runways. The existing NAIA has two runways, although these are not parallel and intersect each other.

Lim said the new airport project would initially have two parallel runways, each with a 3.5-kilometer length. These can accommodate even the largest passenger aircraft.

As part of the proposal, SMC will build an expressway that would link its airport to the North Luzon Expressway (Marilao). That would bring travel time to SM City North EDSA in Quezon City to about 60 minutes, according to details shared by DOTr. The expressway will likewise have a link to the SMC-backed Metro Rail Transit Line- 7 in San Jose Del Monte, Bulacan. 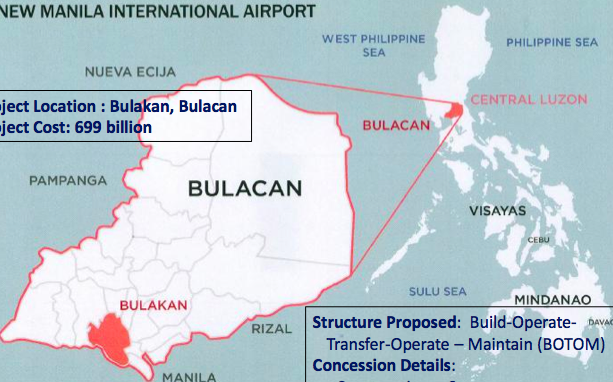 The location of the proposed P700-billion Bulacan airport by the San Miguel Corporation. (PHOTO OF THE MAP FROM SMC PROPOSAL)

A connection to the southern part of Metro Manila, via the “new shoreline expressway,” would cut travel time between the Bulacan airport and the Entertainment City complex to 30 minutes.

Lim shared the details as the Joint Foreign Chambers of the Philippines on Wednesday presented a policy brief on airports in the country.

He added that SMC’s proposal has so far been the only new airport offer for the Greater Manila area being reviewed by the DOTr.

Last year, a consortium backed by taipan Henry Sy of the SM Group and Wilson Tieng of the Solar Group offered to reclaim 2,500 hectares in offshore Sangley Point, Cavite. The P1.3 trillion plan was to transform the area into a new international airport, seaport and industrial complex dubbed the Philippines Global Gateway.

“There have been no formal submissions to the department for the development of Sangley,” Lim said.  SFM