Where power players can flirt on Valentine’s | Inquirer Business

Where power players can flirt on Valentine’s 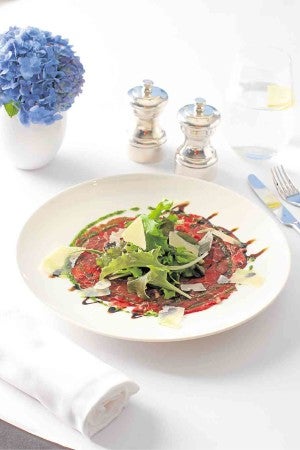 The dishes served by Mireio, the French brasserie on the 9th floor of Raffles Makati, are certain to please.

It’s been a while since Makati has had a place for a real power lunch.

The reputable French restaurants are now in Resorts World (Impressions) and City of Dreams (Tasting Room), too far from the commercial district, making them more for special occasion dates or maybe some gamblers who have just won and want to splurge. Since Tivoli’s adieu, power players had to make do with hotel lobbies for power meetings.

The thing is, Shang Makati has such stuffy lobby food and you can only have so much P400++ arroz caldo at the Pen, even with an expense account. (Whenever I order it, I convince myself that it uses Milagrosa rice that actually turns water into wine and gives you superpowers, and calamansi sifters handmade and lovingly wrapped around each calamansi by lolas and children in an indigenous war-torn community in the south to justify each bite. Meanwhile, politicians order the P300++ tokwa’t baboy to feel pro-poor.)

So where do you go where you can wear your Brioni and not feel overdressed at noontime? Where ladies who buy their own Manolos and Cartiers can sit down for meetings to discuss not only marriages but mergers?

Enter Mireio, the French brasserie on the 9th floor of Raffles Makati.

On my last visit alone, seated as the lone lady with three distinguished gentlemen at what was clearly a meeting—evidenced by laptops on the table—was Liza Araneta Marcos a.k.a. Senator Ferdinand “Bongbong” Marcos Jr.’s first lady.

At the other end of the room sat former Foreign Affairs Secretary Alberto Romulo, with two other former government officials. And on the sunnier side, where the glass walls show you the entire metropolis all the way to Manila Bay, Estelito Mendoza, the Yoda of Philippine law, was quietly having lunch with his legal team. (For the benefit of our young readers, Mendoza was Solicitor General and Justice Secretary under former President Ferdinand Marcos; the law professor of most Supreme Court Justices, including former Chief Justices Hilario Davide and Reynato Puno; and the lawyer of former President Joseph Estrada and former President Gloria Macapagal Arroyo when they were incarcerated, both of whom are back in power today. He is somewhere between 220 and 230 years old, but can still beat any hotshot lawyer of any age in court).

Your eyes may wander not only because of the star-studded lunch cast but because the pacing of service caters to the Provence-style lazy lunch. This is no fast food restaurant, after all. This is for a slow-paced lunch filled with meaningful conversations, possibly negotiations, and important impressions. (Make sure to order immediately if you need to get back to your office by 3 p.m.) 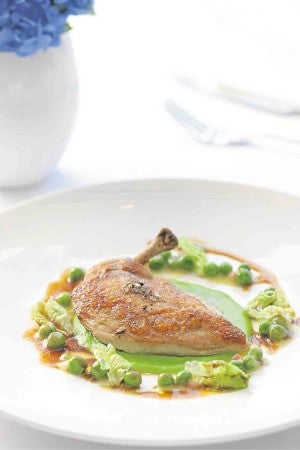 The Chef de Cuisine is Nicolas Cegretin, a very young but very talented French chef, who hails from Provence. Through him, Mireio’s guests will get a taste of the south of France, as we would have it if we had flown there.

It’s true. And the finest example of this is the chef’s bouillabaisse. This fish stew is one of the most traditional dishes of Provence. And Cegretin shows us how it is done. It is rich and dense without being sticky or gooey. And each drop of the broth is full of flavor. I would have it without the seafood that it comes with because the broth is satisfying per se but that would be a shame because the chef uses fresh local produce, as would any respectable chef from the south of France, where farm-to-market is not a new concept but tradition.

The puff pastry is another fine example. I love a good meat pie and it amuses me how the French puff pastry makes the English meat pie look like its boring sister.

Mireio’s version is filled with chicken but upscaled with foie gras, which obviously adds richness, a deep savoriness and creamy texture. The chef drizzles chicken emulsion on top to remind you that the humble chicken has the capacity to be rich. Then he places some mesclun on the side to bring you back to earth.

If you have space in your stomach, order the oxtail. It is fork-tender, as it should be, but flavors are heightened with black truffle jus. It is made to resemble comfort food with a layer of potato on top, with breadcrumbs for flair.

If you want to impress a date at first bite—as you might want to on Valentine’s Day—order the tomato tart. The tomatoes take center stage for sure, but the snails, imported from France, steal the show. It’s just beautiful.

For a more straightforward executive lunch, there is a Menu Dejeuner (day-joo-nay), a prix fixe with a two-course (appetizer and main course) or three-course menu (appetizer, main course, dessert) offerings at just P988 or P1,100. The menu changes monthly but it generally revolves around the classic salmon tartare or a beef carpacio and for mains, maybe seafood with the millennial quintessential ratatouille.

If you have time, do check upstairs. Mireio has a second level that opens to a rooftop bar. If you would like to do “Happy Hour” in style, this is where you go. 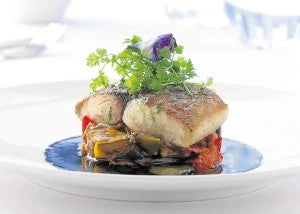 For Feb. 14, this is the rooftop for that Valentine’s Day drink, because of the view. But serious sippers who care about the drinks and not just the effects may appreciate the drink list as much as the sunset: They offer an Ayala champagne (that is the name of the champagne, I kid you not), Sipsmith gin, and stocks of every recent trendy bottle from Don Papa to Hendricks to Laphroaig.

Be sure that you will be able to hold your drink, because there is no other way to get back to the elevator but via the stairs leading to the resto. If you get the bad kind of happy, stick to Long Bar on the ground floor.

The restaurant is not sold as fine dining, although it has all the elements of a fine dining restaurant: An elegant setting with the white linen, proper cutlery, and formal service (the bread lady can get a little eager in serving but the olive oil makes the carbs worth it); not to mention the breathtaking view of the city.

The restaurant, as per Raffles, is a brasserie, allowing a more relaxed experience, where food can be shared, laptops can be opened (electrical sockets are located by the walls), and discussions, whether for finance or for fun, can be made in decibels higher than fine dining whispers.

So if you haven’t heard, here’s news for the power players: The power lunch is back. It’s at Mireio.

Mireio. 9/F Raffles Hotel, 1 Raffles Drive, Makati Avenue, Makati. Reservations recommended. The restaurant also serves as the buffet breakfast outlet of the hotel so they are open for breakfast daily from 6 a.m., including Sundays and holidays. Lunch is served from noon until 2:30 p.m. Dinner is served from 6 p.m. onwards daily. The Mireio Terrace (roof deck) is open daily from 5 p.m. until midnight. Wheelchair is accessible but only for the restaurant via elevator, and not for the roof deck. Major credit cards accepted. Reservations recommended, call  795-0707 or e-mail [email protected]