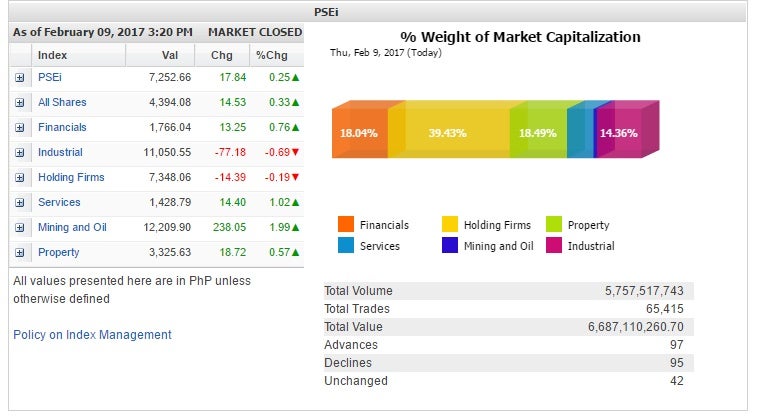 Despite the increase on the main index, the gains across domestic equities were not broad-based and volume was weaker than average.

A total of 97 companies ended higher on Thursday, while 95 declined and 42 were unchanged. Some 5.76 billion shares valued at P6.7 billion changed hands Thursday.

Sub-sectors also closed the session mixed. Mining and oil surged 1.99 percent, followed by services, which was up 1.02 percent. Losers were industrial and holding firms, which sank 0.69 percent and 0.19 percent, respectively.

“The index was traded with an upwards bias [Thursday] as investors bought in anticipation of more earnings results during the next few trading days,” Luis Gerado Limlingan, managing director at Regina Capital Development, said in a text message.

PLDT Inc. was the most actively traded company on Thursday, adding 4.41 percent to P1,515 per share.