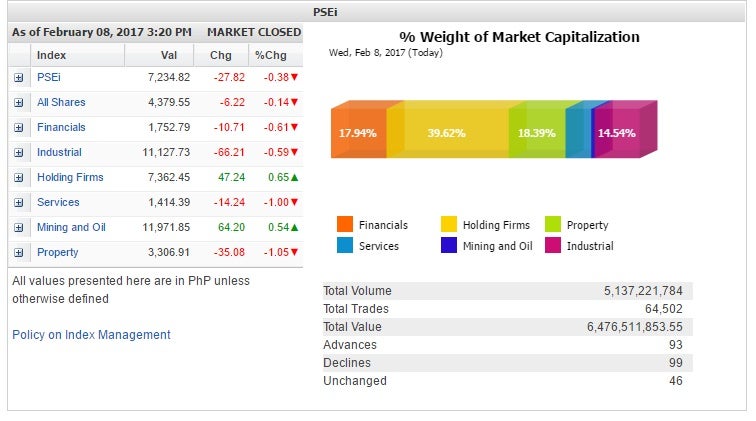 Elsewhere in the region, stock markets were mostly sluggish as investors were jittery over the new policies of US President Donald Trump.  They were likewise cautious about the upcoming presidential elections in France this April 23.

The PSEi was dragged down most by the services and property counters, which both fell by more than 1 percent, while the financial and industrial counters likewise slipped.

On the other hand, the holding firm and mining/oil indices ended slightly higher.

Total value turnover for the day amounted to P6.48 billion.

There were 99 decliners that edged out 93 advancers while 46 stocks were unchanged.

Globe’s core profit rose by 6 percent to P16 billion while revenues were up 6 percent to P120 billion. Globe also announced a $750-million capital spending program this year and said its fourth-quarter revenues might have exceeded PLDT’s.

Meanwhile, Metrobank also weighed down the PSEi with its 2.64 percent drop. It was the day’s most actively traded stock.

Outside the PSEi, one notable decliner was Basic Energy, which slid by 6.67 percent.

One big gainer outside the PSEi was Philrealty, which surged by 20.27 percent in relatively heavy volume. The property developer officially graduated from court-assisted corporate rehabilitation recently.

Juan Barredo, COL Financial chief technical analyst, said in a recent briefing that the PSEi could find short-term support at 7,123 to 7,024.  If the PSEi would breach the major upside barrier at 7,402, he said the main index could rally toward the 7,700 to 8,100 levels within the year.

“There will be countless opportunities for investors to move in and out of the market,” Barredo said.