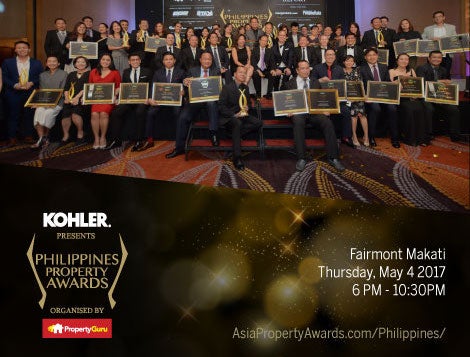 Nominations are open and are now flooding in for the fifth annual PropertyGuru Philippines Property Awards, the biggest and most prestigious real estate awards programme in the country.

Presented by Kohler in 2017, the acclaimed international event is organised by PropertyGuru Group, Asia’s leading online property group. The organisers are calling on Philippine developers as well as real estate agents, architects, interior designers, construction companies, suppliers and the general public to continue sending in their nominations online via AsiaPropertyAwards.com/nominations/ .

Deadline for submissions is on Friday, 3 March 2017. There is no fee to enter.

BDO, one of the world’s largest accounting and auditing firms, has been appointed once again as official judging supervisor to ensure that the entire nomination and judging process is fair and transparent.

Celebrating its landmark fifth year, the Philippines Property Awards 2017 is the search for the Philippines’ best property developers and developments located in the established and emerging property markets of Mega Manila, Metro Cebu, and Metro Davao, in addition to popular and emerging resort destinations and BPO office locations across the country.

Each year since its establishment in 2013, the Philippines Property Awards have highlighted the exciting evolution of the country’s real estate sector. Last year a total of 17 shortlisted developers walked away with 26 awards following a rigorous, six-month nomination and judging process.

The 2017 edition presents an expanded awards scheme. New categories have been added, including a Special Recognition in Sustainable Development, which will reward the sustainable initiatives of outstanding developers from Luzon, Visayas or Mindanao.

There will also be new awards for Best Mixed-Use Development and Best BPO Office Development reflecting the growth of those sectors.

To be eligible for the Best Developer and Best Boutique Developer categories, entrants must have completed five and two projects, respectively, since January 2012, while projects entering the Development categories should have a completion date between January 2017 and December 2019.

Chairman of the judging panel Lindsay J. Orr, chairman of JLL Philippines, reflects on the judging process and importance of the Awards programme: “The panel had quite a task last year simply because there were a lot more entries across various categories and regions, up by around 50 percent, and the numbers of categories increased as well. We also received entries from new companies. I think it’s because this Awards are becoming more recognised nationwide. It’s certainly on the map and we hope this continues in years to come.”

The official shortlist of nominees, comprising one Winner and up to four Highly Commended in each category, will be revealed by the independent judging panel led by Orr in early April 2017. The black-tie gala dinner is set to take place on 4 May 2017, once again at the Fairmont Makati, the official hotel venue of the Awards. Prior to the gala dinner, a new Real Estate Personality of the Year will also be named by the editors of Asia’s industry leading Property Report magazine, PropertyGuru Group’s premium publication.

Terry Blackburn, founder and managing director of the Asia Property Awards, says of the growing impact of the Philippines Property Awards: “The support from developers, sponsors, media partners and business associations we have received over the years has been incredible – in the last five years we’ve seen the awards programme expand to include categories specifically created for regional developments in key markets such as Cebu, Davao and Iloilo.”

He adds: “The Awards continues to reflect a very strong Philippine real estate sector, which has now become one of the main drivers of the fast-growing Philippine economy that grew by around 9 percent in 2016 .”

With an average attendance of 250 senior industry figures, C-level executives, architects, designers, suppliers, construction, real estate and media professionals, the Philippines Property Awards annual gala dinner is one of the most anticipated industry events of the year.

As always, the Philippines Property Awards promote the country’s best current developments and latest innovations to a wide international audience across Asia. The ‘Best of the Best’ winners from the Philippines will compete for regional accolades in grand finals of the Asia Property Awards held annually in Singapore in November, opening up their businesses to new audiences around the region.

Hari V. Krishnan, CEO of PropertyGuru Group, comments: “As a ‘hyper-growth’ technology company, a core tenet of PropertyGuru Group’s culture is to pursue greatness, which is mirrored by the exceptional quality of entrants in the Asia Property Awards year after year. Our brand promise is to help people make confident property decisions. The Awards platform is a key part of our offline solution, and allows consumers to identify the highest quality real estate developers in the region and thus be more confident in their property decisions.”

More information and eligibility rules of the Philippines Property Awards 2017 are available on the official website: AsiaPropertyAwards.com/philippines-property-awards/ ADVT