Maid who left Singapore as a businesswoman 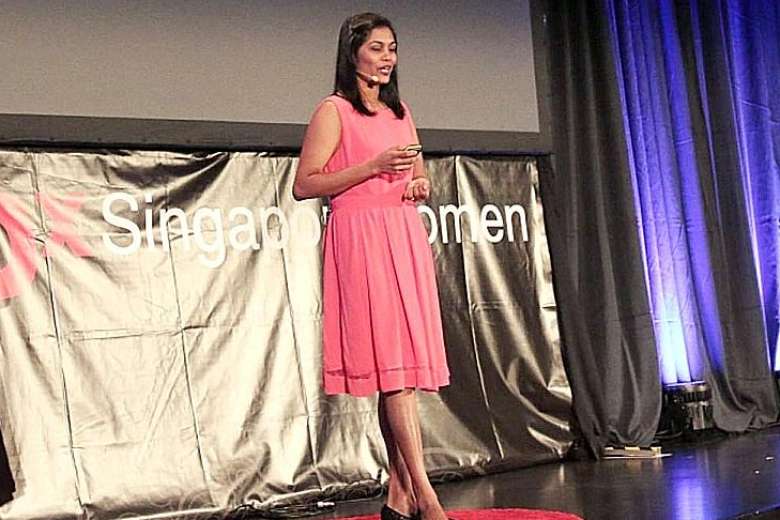 Ms Nilushika Jayaweera giving a talk at TEDxSingapore in October. She grew up in an orphanage after her parents died and left Sri Lanka for Singapore to earn a living. TEDXSINGAPORE WOMEN

Nilushika Jayaweera came to Singapore to work as a maid in 2001 and 15 years later, she left as an entrepreneur.

The 36-year-old now buys tea leaves from gardens in Sri Lanka and boxes them for sale to some 500 international customers.

She was back in town recently to join a growing list of inspirational speakers on the TED Talks circuit. Other speakers have included tech giant Bill Gates, former United States vice-president Al Gore and researcher Jane Goodall.

Nilushika was invited to speak at TEDxSingapore on Oct 29 this year at Capital Tower.

Not bad for a woman who grew up in an orphanage and was forced to leave her siblings behind to earn a living.

“Back then, I didn’t know who I was or what I wanted. Life just happened to me,” said Nilushika, who came to Singapore to support her four younger siblings.

Her parents died when they were young. Nilushika and her siblings grew up in an orphanage.

In her presentation, Ms Nilushika highlighted the work of Aidha, a non-governmental organization (NGO) in Singapore that mainly teaches maids how to manage their money and start businesses. It was Aidha – a Sanskrit word which means “That to which we aspire” – that transformed her life.

Nilushika said her time in Singapore not only equipped her with business skills, but it also taught her how to empower women in her home country, Sri Lanka.

The money generated from the tea business helped her start her own NGO a few months ago. She is now teaching women in her village how to start small businesses such as pig farming, dressmaking and spice-packing so as to lead independent lives.

Nilushika said she learnt about Aidha in 2011. She was facing some family problems then and her employer thought Aidha’s courses could help her. So her employer paid $400 and signed her up for weekend courses where she picked up financial literacy, business and leadership skills.

With these skills, she helped her husband back home to set up a small online tea business.

“Learning the skills from the courses created more choices and possibilities for me. I began to realise that education and empowerment are key to a brighter future for women,” Nilushika said in her speech.

She now uses part of her earnings to pay for the children in her village to get an education, including buying them school books.

Nilushika is one of 3,350 domestic workers whom Aidha has reached out to in Singapore since it was set up in 2006. There were 237,100 such workers as of June this year. The NGO, which started as a United Nations Women project, is celebrating its 10th anniversary this year.

According to Aidha’s figures, more than four in 10 maids who joined its weekend classes go on to start businesses in their home countries. About a third of those who start a business go into farming, while the rest open restaurants and retail shops.

Aidha also educates domestic workers on the importance of savings. Based on a study of about 1,300 of its students, it found that their monthly savings increased by 68 per cent to about $220 after attending two financial literacy courses. That is almost half of the monthly salary of Indonesian and Filipino maids.

“Having adequate savings and skills to start a business is key, given the dearth of good employment opportunities and low pay back in their home countries.

“We want to break that cycle of poverty and that can start when they are in Singapore,” said Aidha’s chief executive Jacqueline Loh.

The maids who turn up at Aidha, which is located at United World College in Dover Road, pay $400 to attend three-hour lessons twice a month on Sundays for nine months.

Half of the students have their fees paid for by their employers while others now have a $100 subsidy provided by sponsors.

For instance, MasterCard donated US$15,000 (S$21,700) last week to Aidha’s fund-raising campaign. A third of Aidha’s costs are covered by student fees, while the rest are drawn from corporate and institutional funders.

The courses, which include language and IT skills, are run by more than 200 trained volunteers. These volunteers, and some maids, also organise hobby-related classes such as on dancing, make-up, yoga and cooking during the weekends.

“We estimate a multiplier effect of nine lives impacted for each of the women who attend our courses based on their average number of dependants and the number of employees in the businesses they start.

Indonesian maid Nur Aini, 34, has been attending courses and helping Aidha with administrative work for the last five years. She is also the leader of a dance group there.

“Aidha is like a second home to me. I gained confidence in using English to communicate with others,” said Ms Aini, who plans to return home to start an English school in four years’ time.

“I also discovered that I have hopes, dreams and abilities that go beyond domestic work.”

Loh said Ms Nilushika’s story will inspire others. “Like many of the maids here, she worked for many years and had little savings.

“Her story shows that if she can overcome monumental challenges, others too can do so.”