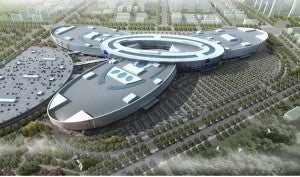 Property giant SM Prime held a soft opening of SM City Tianjin, its seventh shopping mall in China and one of its largest shopping malls to date with 565,000 square meters in gross floor area.

The new mall was opened last Saturday, Dec. 17. Designed by ARQ, a world-renowned design agency, the mall has three structures that are positioned to look like a large blossoming flower from above, symbolizing growth and new opportunities.

SM Prime continues to expand in China as its consumer spending growth remains to be strong. From 2000 to 2010, China’s consumption grew from around $ 650 billion to $1.4 trillion creating the largest consumer market in the world. China’s consumption has been growing faster than any other country’s in absolute terms.

SM City Tianjin is the newest landmark within the Tianjin Airport Economic Area at the emerging Binhai New Area, the largest free trade zone in Northern China and a thriving central business district where international corporations in logistics and financial services are setting up offices. Considered as a “new economic pole” along the Shenzhen Special Economic Zone and Shanghai Pudong New Area, the Binhai New Area is home to over 2,000 enterprises from 130 countries.