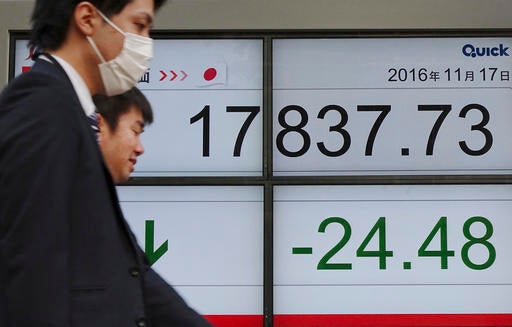 Men walk past an electronic stock board showing Japan’s Nikkei 225 index at a securities firm in Tokyo, Thursday, Nov. 17, 2016. Asian stock markets were mixed Thursday as a seven-day rally on Wall Street petered out overnight. The U.S. dollar retreated slightly after hitting a 13-year high and oil prices slipped. AP

WALL STREET: Stocks pulled back following a record run, though a spurt in oil prices Monday helped push energy issues higher. Nine stocks fell on the New York Stock Exchange for every five that rose. The Standard & Poor’s 500 has climbed 5.4 percent since the presidential election on expectations proposed tax cuts will lead to higher profits. The rise in energy stocks including Exxon Mobil and Chevron propelled the Dow Jones industrial average up 0.2 percent to a record 19,796.43. The S&P, a broader market benchmark, 0.1 percent, to 2,256.96. The Nasdaq composite fell 0.6 percent to 5,412.54.

FED WATCH: Investors almost universally expect the U.S. Federal Reserve to hike interest rates when it ends a policy meeting Wednesday. It would be only the second rise in a decade. The Fed has kept rates near zero since the 2008 global crisis but its leaders have indicated the U.S. economy is improving enough to start moving gradually toward normal policy. Low interest rates have helped to boost stock prices but are hurting savers who look for income from bank accounts and bonds.

ANALYST’S TAKE: “For Asia, things have perhaps been a little less optimistic,” said Jingyi Pan of IG in a report. Pan cited uncertainty over China’s monthly data and U.S.-Chinese tensions over Taiwan and Beijing’s filing of a World Trade Organization complaint against the United States and Europe Union for failing to treat it as a market economy. “As each other’s largest trading partner, the impact of a deteriorating relationship will be significant on both ends, commanding due concerns from the markets,” Pan said.

CHINA: Economic data for November showed relatively strong activity. Industrial production grew 6.2 percent from a year ago, up from October’s 6.1 percent. Growth in investment in real estate and other fixed assets held steady at 8.8 percent, though growth in private sector investment declined to 4.6 percent from October’s 5.1 percent. “Another set of broadly positive data suggest that China is on track to end this year on a strong note,” said Julian Evans-Pritchard of Capital Economics in a report.

CHINA’S TUMBLE: Chinese stocks have declined amid concern about tighter regulation, Fed action and U.S.-Chinese tensions. The Shanghai benchmark fell Monday by an unusually wide margin of 2.5 percent. Analysts blame unease after Chinese regulators visited insurance companies, which are major traders, and banned one from further investing in stocks. Analysts suggested investors also are waiting to see the Fed’s decision on whether to raise U.S. rates.