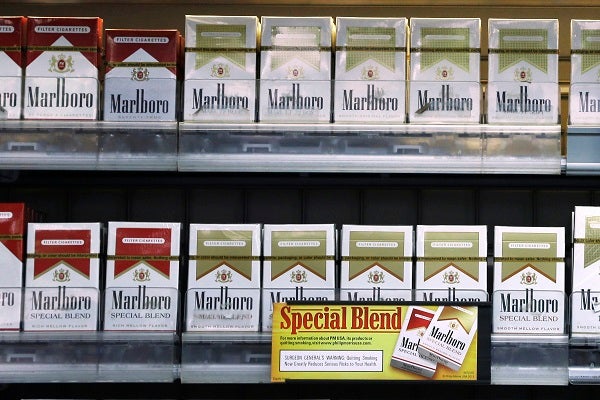 Collection of taxes from manufacturers of cigarettes and alcoholic beverages surged in the first eight months of the year, boosted by the higher tax rates that have so far failed to dampen consumption of these so-called “sin” commodities. AP PHOTO

Health groups yesterday lambasted members of the Lower House who railroaded a bill aimed at retaining the two-tier excise tax system for tobacco products next year instead of sticking to the scheduled shift to a unitary rate.

“The legislators chose to protect the interest of tobacco industry, a long-standing clique of power in Congress, known to most as the Northern Luzon Alliance. They struck again with decisive force to ram through legislation a proposal that will kill the health and revenue gains of the Sin Tax Law. They are trying to beat the Christmas rush and hoping to deliver the goods to their master, in this case, the tobacco companies, as soon as possible,” the groups lamented.

“The Christmas aguinaldo for a job well done may be forthcoming for these legislators, thanks to a bill that will surely bring more profits to the tobacco companies’ coffers as more people die because of smoking-related diseases,” the groups further claimed.

Last Monday, 26 committee members voted for the passage of HB 4144 authored by ABS Partylist Rep. Eugene Michael B. de Vera and said to be pushed by local cigarette manufacturer Mighty Corp., which churns out cheaper cigarettes.

Under the Sin Tax Reform Law or Republic Act No. 10351, tobacco products will be slapped a unitary rate of P30 per pack starting Jan. 1, 2017, following a two-tier system this year wherein cigarettes priced P11.50 per pack were being taxed P25 while those priced higher were slapped P29 per pack.

But HB 4144 was proposing that the two-tier system be maintained by slapping an excise tax rate of P32 per pack on cigarette packs priced P11.50 and below and P36 for those priced higher. It also proposed an annual 5-percent increase in the excise tax beginning 2018.

Industry sources claimed the bill was railroaded—it was filed only on Oct. 19 and had undergone only two hearings at the committee level, the first one last Nov. 28.

After it was approved without amendment on Dec. 5, HB 4144 was already tackled in the plenary the next day as the bill was also adopted as the committee report submitted to the committee on rules.

“Deliberation started the following day and could have been approved without the timely intervention of pro-health advocates among the members of the House. We are alarmed that Congress leaders are bent on getting this passed today,” ASH executive director Maricar Limpin said.

During the plenary discussions Tuesday, “Rep. Pia Cayetano, Rep. Edcel Lagman, and Rep. Josy Limkaichong raised the health impact of the bill and said it should be discussed lengthily before the measure is passed,” according to the health groups.

However, the groups claimed that the legislators belonging to the Northern Luzon Alliance “tried to stall opposition to HB 4144 of pro-health legislators.”

According to AER president Cristina Morales-Alikpala, “a two-tier tax system would make it easy for tobacco manufacturers to produce cheap brands to avoid higher taxes.”

“A higher unitary tax rate will protect and save more lives, and significantly reduce downshifting to cheaper brands. HB 4144 will be bad for both health and revenues,” Alikpala said.

The health groups said they were instead supporting HB 4575 filed by Albay Rep. Joey Salceda also on Dec. 5. Salceda voted for the approval of HB 4144, although he expressed reservations to the bill.

In HB 4575’s explanatory note, Salceda said “a two-tier tax is a bad policy because the poorest 1 percent of Filipinos use 4.7 percent of their income for tobacco.”

“Imposing a lower tax on low-priced cigarette products that the poor consume will encourage them to smoke further,” the health groups quoted Salceda as saying.

“We rally behind Rep. Salceda’s proposal because it builds on the intent of the Sin Tax Law. HB 4575 will be effective in encouraging more smokers to quit and discourage vulnerable sectors, such as the youth and the poor, from smoking,” National Academy of Science and Technology academician Antonio Dans said.

“At least 10 percent of smokers would simply switch to low-priced cigarettes if HB 4144 is adopted. Instead of quitting, smokers could end up consuming up to 50 percent more of the cheap cigarettes,” Dans added.