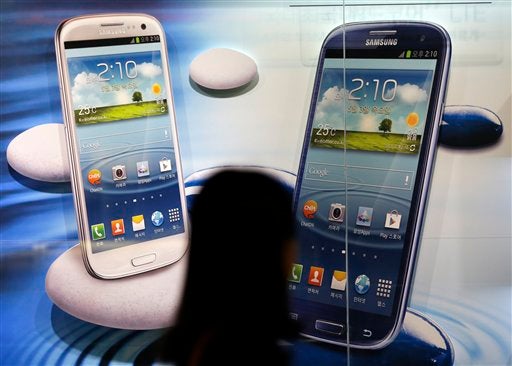 A woman walks by a billboard of Samsung Electronics’s smartphones at a showroom of its headquarters in Seoul, South Korea. AP FILe

WASHINGTON, United States — The US Supreme Court on Tuesday overturned a $399 million patent infringement penalty imposed on Samsung for copying Apple’s iPhone design, in a case watched for its implications for technology innovation.

The shorthanded justices ruled 8-0 that Samsung should not be required to forfeit the entire profits from its smartphones for infringement on design components, sending the case back to a lower court.

While the ruling was short on specifics, analysts said it was likely to curb litigation from patent holders expecting to reap big profits from infringement on a component.

The 11-page ruling found that the $399 million penalty — one element of a major patent infringement case — was inappropriate because it represented “Samsung’s entire profit from the sale of its infringing smartphones” for copying the iPhone’s “rectangular front face with rounded edges and a grid of colorful icons on a black screen.”

But the court stopped short of delving into details of how the lower court should determine the penalty.

Justice Sonia Sotomayor wrote in the opinion that “doing so would require us to set out a test for identifying the relevant article of manufacture… and to parse the record to apply that test in this case.”

The court sent the case back to the appellate court in Washington to resolve the details.

The case is one element of the $548 million penalty — knocked down from an original $1 billion jury award — Samsung was ordered to pay for copying iPhone patents.

Observers had been watching to see how the court — which had not taken up a design patent case in more than a century — would tip the balance between technological innovation and protecting intellectual property.

Dennis Crouch, a University of Missouri law professor and co-director of the Center for Intellectual Property and Entrepreneurship, said the ruling may leave both sides disappointed.

“Although the case offers hope for Samsung and others adjudged of infringing design patents, it offers no clarity as to the rule of law,” Crouch said in a blog post.

Crouch said the court allowed for damages at the component level but also indicated that the product as a whole is “an article of manufacture,” leaving the matter open to interpretation.

“Thus, it will be up to courts to figure out which level (of damages) applies in particular cases,” he wrote.

Samsung won the backing of major Silicon Valley and other IT sector giants, including Google, Facebook, Dell and Hewlett-Packard, claiming a strict ruling on design infringement could lead to a surge in litigation.

Reacting to the verdict, an Apple spokesman said in an email, “Our case has always been about Samsung’s blatant copying of our ideas, and that was never in dispute… We remain optimistic that the lower courts will again send a powerful signal that stealing isn’t right.”

Samsung did not immediately respond to requests for comment.

Florian Mueller, an intellectual property analyst who writes a closely followed patent blog, wrote that “large parts of the (US and global) tech industry will breathe a sigh of relief now,” even if the case is not settled.

“This was a pivotal court case for the technology industry and it is encouraging to see the law interpreted and applied in a way that makes sense in a modern era and protects both inventors and innovation,” Black said.

The lower court’s interpretation of design patents, Black said, “would have had a chilling effect on investment and the development of products — especially in the tech sector.”

Brian Love, a law professor who follows technology at the University of Santa Clara, said it was noteworthy that the top court declined to provide detailed guidance on how to resolve the damage award.

“The district court may well end up allowing the entire amount to stand, but it seems more likely that the award will be substantially reduced,” Love said.

“Companies suddenly saw design patent rights as a potential gold mine. Now, it seems likely that assertion of design patents will return to being a rare occurrence.” CBB