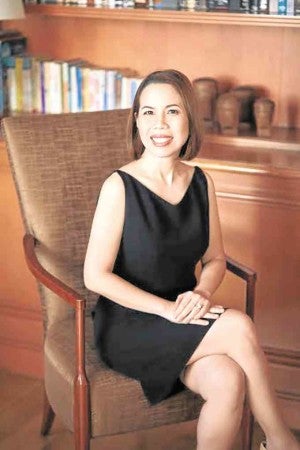 After making it big in the corporate world, Suyin Liu Lee feels that it is time to achieve a higher goal

It’s all Patrick’s fault!” Suyin Liu Lee says with a laugh, as she looks back on her first four years as Executive Director of the non-profit Asia Society Philippines.

“I left Manila in 1994 for the United States to pursue a career in finance.  But my husband Patrick, who is Chinese-American, saw so much opportunity back in Asia, and particularly, in the Philippines.  He wanted our children to grow up in the closeness of family and friends, and with values like empathy, which is central to the Filipino soul,” explains Lee.

Lee then decided that if she was going to move back to Manila, then for her next professional and personal chapter, she wanted it defined by an emphasis on giving back.

Since 2012, Lee, who has a management degree from the Ateneo de Manila University and a Diploma in Finance from U.C. Berkeley and most recently worked for Mark Mobius, Templeton Asset Management’s famed Asia-bullish fund manager, has done just that.

“My mom and dad were people who followed their passions.  From an early age they taught me that happiness or fulfillment didn’t come from the corner office or the fat paycheck, but from finding something you really love, are willing to commit 100 per cent of yourself to, and from which you can pay it forward.  At home and at school, I was taught to think of others, to be grateful for the blessings I’ve had, and always, to give back,” she says.

Asia Society Philippines is that place where paying it forward is front and center of its mission, every day.

The Philippines is the single Southeast Asian outpost of the prestigious, Park Avenue, New York-headquartered Asia Society, which was founded by billionaire David Rockefeller in the heat of the 1950’s cold war.  From the start, it was designed to be an organization focused on bringing down the barriers between East and West.

In such an environment where passions can escalate quickly, Asia Society Philippines hopes to be that “safe space” where people of differing opinions can come together and share ideas.

“When people come together, when we can raise the quality of our political, economic and social discourse beyond mere name calling and threats, that’s when different sides can sit down, really talk and craft the hard solutions to our country’s problems,” Lee explains.

You may or may not have heard of Asia Society Philippines, after all, Lee heads a lean team of less than five.

But you will have heard of the legendary Washington SyCip, who created the Manila chapter, Asia Society Philippines, in 1998.

“Asia Society in the Philippines was established to help promote a deeper understanding of Asia among Filipinos.  It also strives to help people from other nations appreciate the Philippines as an integral part of the Asia,” SyCip had said.

“Ours is a truly powerhouse board. We’re so grateful for their inspiration, guidance and participation.  They are really involved!  That gives our members and program participants huge benefits. For on a practical level, they enable Asia Society Philippines to really punch above our weight,” Lee remarks.

“For example, if one of our provincial student leaders, part of our “Asia 21 Philippine Young Leaders” program, calls and says, “I have a specific problem or challenge I need to resolve,”, the chances are very high that from across the member companies of our board, private sector ideas, help and solutions will be quickly forthcoming,” she says.

Asia Society Philippines’ Asia 21 Young Leaders Program is a prime example of how prospective members can make the right connections.

Identifying young leaders under 40 years of age and from across a variety of sectors, Asia Society Philippines empowers them with mentoring, connections to high-level private and public sector leaders, and helps in real-world problem solving.

The 67 fellows are selected through a highly competitive process based on prior outstanding achievement, commitment to public service and a proven ability to make the world a better place.

“Transparency 5.0” is hosted in partnership with the International Center for Innovation, Transformation and Excellence in Governance (InciteGov), and hopes to spark positive change at a time when the roles and relationships of government, media, and citizens are evolving.

The forum will begin at 1 p.m. at Fuller Hall at the Asian Institute of Management in Makati.

“Transparency is an important issue for everyone nowadays and we look forward to a full house.  In fact, we welcome anyone as a member, at any stage of their professional career, or interest level.  From cinema and culinary festivals to political and cultural forums, Asia Society Philippines is poised to play an important role in public conversations going forward.  We’re connectors, after all, and Filipinos are all about making the right connections.  Truly, Asia Society Philippines is a great place to make them,” adds Lee. —Contributed