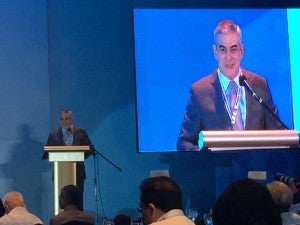 The Philippines must seize a “unique but fleeting” window amid emerging trends in global manufacturing to establish itself as a pioneer in high-value manufacturing in Southeast Asia, the head of conglomerate Ayala Corp. Jaime Augusto Zobel de Ayala said on Tuesday.

In a keynote speech during the Manufacturing Summit 2016, Zobel said he believed the Philippines was well-positioned to capture opportunities in manufacturing, given its sound underlying economic fundamentals, abundance of qualified workforce and the emerging trends in global manufacturing operations.

Some of the trends seen favoring the Philippines cited by Zobel were as follows:

-Technological breakthroughs that enable extreme connectivity and extreme automation around trends such as artificial intelligence, robotics, the internet of things, and autonomous vehicles, among others are disrupting business models in an accelerated pace;
– Disruptive technology-driven trends such as autonomous driving and electrification are redefining the global automotive sector. With a growing global vehicle production, the rise of hybrids and electric cars, as well as constant innovation in automotive systems, the current 40 percent share of electronics over the total cost of a car is estimated to increase to over 50 percent by 2025; and,
– There is an emerging shift in supply chain strategy, where manufacturers like Lenovo and Inditex (owner of the Zara retail chain) are increasingly finding it more sensible to produce their goods closer to their core markets – a trend also known as “nearshoring” or “build where you consume”.

Ayala’s electronics manufacturing arm Integrated Micro-Electronics Inc. had adopted a similar strategy, for instance, building an automotive electronics segment in Bulgaria for proximity to the original equipment manufacturers based in Europe who are the end-users of its products.

“Reflecting on these emerging trends, I believe the Philippines can position itself as a viable destination for manufacturing investments,” Zobel said.

Ayala is particularly upbeat on the automotive industry, citing the strong growth in vehicle sales since the country passed the “motorization” threshold of $2,500 per capita gross domestic product in 2012. Since then, he noted that vehicle sales had been growing at an average rate of 18 percent annually.But out of 320,000 new vehicles sold in the Philippines last year, Zobel noted that only 30 percent was locally manufactured.

“I believe this presents a compelling opportunity to take on a ‘build where you consume’ strategy for the Philippine automotive industry. Traditionally, our manufacturing industry has been focused on the lower end of the value chain. For many years, the semiconductors and electronics segments have been the most dominant contributor to the industry,” Zobel said.

While it’s “not a bad thing” that the Philippines is a major producer of automotive components, Zobel said the disruptive trends taking place in the global automotive space had opened up a host of untapped opportunities that the country could leverage to move up the value chain.

Zobel cited the evolution of IMI as a global provider of electronics manufacturing services for the automotive, industrial, medical, and telecommunications industries. Over a decade ago, he noted how IMI had made a deliberate move to reinvent itself in response to the challenges and volatility of the global economy, diversifying into fast-growing and high-margin segments. At present, IMI is the 21st largest electronics manufacturing service (EMS) provider and the sixth largest automotive EMS supplier in the world.

Ayala has also partnered with KTM, the largest motorcycle manufacturer in Europe, to distribute and manufacture motorcycle models in the Philippines under the KTM brand. Initial plans for the manufacturing facility would be to produce 20,000 units annually. Production for the domestic market is seen to start by the first quarter of 2017 and subsequently, export to China and other Southeast Asian countries is targeted later in the year. IMI is now building this manufacturing facility in IMI’s complex in Laguna.

But achieving a sustainable revival of the manufacturing industry will require collaborative efforts between the government and the private sector, Zobel said.

“First, I believe it is imperative that we develop an integrated country strategy for the manufacturing
sector under a single and unified roadmap across the entire spectrum of the supply chain. The country strategy should cover a wide range of areas like policies, incentives, as well as mechanisms to empower the micro, small, and medium enterprises, who are important participants in the manufacturing supply chain,” Zobel said.

Secondly, Zobel said the Philippines would need to accelerate investments in infrastructure development, particularly in transport. He noted that the current administration was already addressing this gap with a target to raise infrastructure spending to at least 5 percent of gross domestic product in 2017.

“Finally, the government and the private sector can collaborate in retooling and reskilling our existing workforce. While we have a qualified workforce that can be readily deployed to take on varying levels of manufacturing roles, the accelerated pace of technological disruptions can present potential skills gap. We need to develop a workforce who are agile and can be highly flexible to changes,” he said.

The Ayala group earlier partnered with UK-based Pearson Education to set up APEC Schools, a high school designed to train its students with the skills and values relevant to employers.

“With its enormous and inclusive job generating ability and boundless multiplier effect, a robust
manufacturing industry can truly stimulate economic prosperity for a broader segment of Filipinos.
We are all ready to do our part, and I believe that with stronger collaboration, we will be able to take this engagement to the next level and bring this aspiration to fruition,” Zobel said.