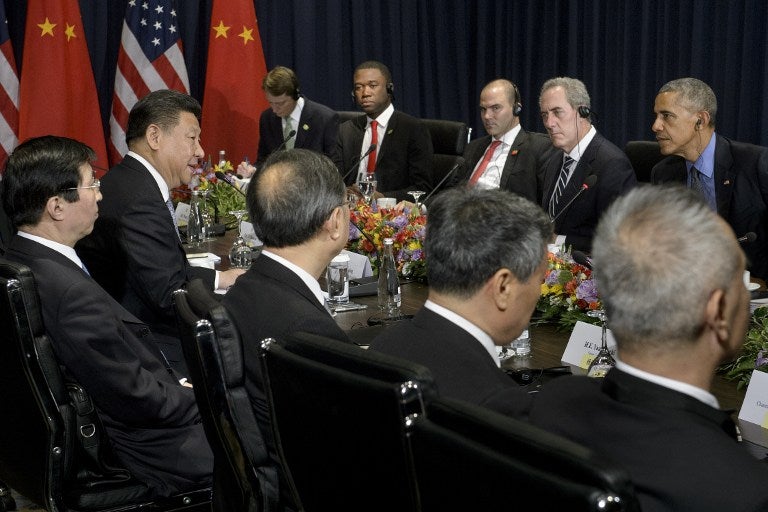 US President Barack Obama (right) and other US officials listen to China’s President Xi Jinping (2nd from left) make a statement before a meeting November 19, 2016 in Lima, Peru.  AFP

Trump’s shock victory has cast uncertainty on the future of Washington’s key trade initiative in the Pacific Rim, the arduously negotiated, 12-country Trans-Pacific Partnership, or TPP.

The brash billionaire campaigned against the accord, which has not yet been ratified in Congress, as a “terrible deal” that would “rape” the United States by sending American jobs to countries with cheaper labor.

In a Pacific region hungry for trade, that has left even longtime US allies like Australia and Japan looking to China to fill the void.

Beijing, which was excluded from TPP, is pushing two alternatives: the 21-member Free Trade Area of the Asia-Pacific (FTAAP) and a 16-member Regional Comprehensive Economic Partnership (RCEP), which notably includes India but not the United States.

Xi urged regional leaders to advance both deals at a summit in Lima, Peru, where the uncertainty unleashed on the world stage by Trump’s victory loomed large.

“We should firmly pursue FTAAP,” he said. “Openness is vital for the prosperity of the Asia-Pacific.”

In the face of Trump’s protectionist rhetoric, he vowed China “will not shut its door to the outside world, but open it even wider.”

“We will fully involve ourselves in economic globalization by supporting the multi-lateral trading regime, advancing the FTAAP and working for the early conclusion of the negotiations on the Regional Comprehensive Economic Partnership,” he said.

In the face of Trump’s protectionist rhetoric, he [Xi] vowed China “will not shut its door to the outside world, but open it even wider.”

China describes RCEP as a stepping stone toward FTAAP, a vast plan that would include all 21 APEC members and is expected to take years, if it happens at all.

The meeting of APEC, which accounts for nearly 40 percent of the world’s population and nearly 60 percent of the global economy, is US President Barack Obama’s last foreign visit before handing over to Trump on January 20.

Obama and Xi, the leaders of the world’s top two economies, were due to hold their last meeting later Saturday.