business / Editors' Picks
Editors' Picks
IN PANAMAO, SULU IN MINDANAO, THE ROAD TO PEACE HAS, IN A SENSE, BEEN PAVED WITH COFFEE BEENS BY PRINCESS KUMALAH SUG-ELARDO 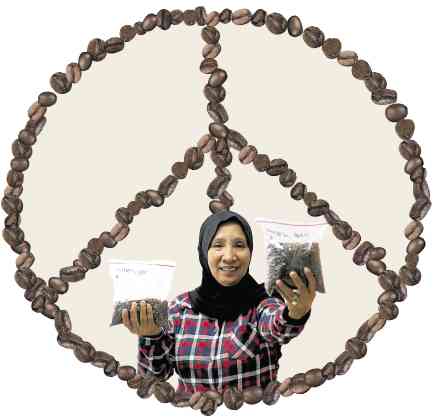 The town which used to be ravaged by armed rebels is now known for their thriving coffee farms run by around 2,000 members of the People’s Alliance for Progress Multipurpose Cooperative (PAPMPC), formed by 64-year-old Sulu Princess Kumalah Sug-Elardo.

Elardo was motivated to organize coffee farmers through PAPMPC in 2008 in her hometown of Panamao after she saw coffee berries just scattered all on the streets. “I thought to myself, how could I help the people and what could I do to improve the state of the coffee [industry] here?” says the former social worker.

While her initial intention was to educate her kababayan to alleviate them from poverty, Elardo found that her initiative also, slowly, began to change the community’s peace and order situation.

“When we first started, ambushes by lawless elements were still the norm. Soldiers were dying left and right, which also, of course, scared the civilians. It affected the entire community,” she recalls.

Some of PAPMPC’s farmers were themselves members of a well-known rebel group in the province, she adds. However, as the cooperative began to earn more from their coffee production, Elardo says these members took it upon themselves to stop participating in the rebel group’s activities.

The last violent incident, she says, happened in 2012, when a nearby bridge was bombed. “[Philippine Coffee Board president and EchoStore’s] Chit Juan was visiting us at the time, but she couldn’t get to us because of what happened. But that was the last of it.”

“During the Zamboanga siege [in 2013], not one of our members [who are affiliated with the Moro National Liberation Front] joined, as it was harvesting season. And they used to be hardcore [members],” she adds, proudly.

Elardo attributes such improvements to the radical change in the community’s attitude, which she sees as a direct effect of their better economic status. From a starting capital of just P170,000, PAPMPC is now worth P15 million in assets. From earning just P40 per kilo, PAPMPC’s products now cost P250 to P280 per kilo.

Aside from Panamao, PAPMPC is present in three other municipalities in Sulu, covering 30 barangays. Their product, called Sulu Royal Coffee, comes in two variants: Original blend and civet coffee (made from the droppings of the civet cat).

The organization was able to grow also thanks to Elardo’s perseverance in seeking financial support from both government and the private sector, as well as establishing a better relationship between the military and civilians.

“Before, our farmers had no savings. Now they have around P120,000 in annual savings. They can send their kids to school. So our members know that if they continue to accommodate armed rebels—and I have relatives who are part of that—it would only invite violence between them and the government, which would affect their business,” Elardo says.

Another factor which keeps the peace, which, again, Elardo did not expect would do so, is the physical setup of PAPMPC’s farms, which has rows and rows of high fences.

“Each of the plots of coffee trees has its own fence. This deters lawless elements from passing through as they would have to jump over each fence—they would just get caught [by soldiers],” says Elardo.

Just as she did when she first started PAPMPC, Elardo attends seminars on coffee production to keep her farmers up-to-date on the latest technologies and innovations. Her latest discovery: The different roasting processes, which was recently taught by international coffee expert Trish Rothgeb of the Coffee Quality Institute at a seminar in Manila.

“I got good feedback [from my farmers]. They were very happy with the new things they learned,” she says.

Elardo also makes it a point to share her coffee knowledge with others. In October, she is speaking at the ninth National Coffee Summit in Davao City, where she says she will focus her talk on the coffee business’s positive effect on Mindanao’s peace and order situation.

“I guess I’ll be challenging President Duterte’s methods, since he believes force is needed to bring about peace. I’ll be presenting a different point of view—that the solution should be centered on economic [reform]. I should know, because I experienced it firsthand,” she says. “Those in the transport sector earn a living because you pay them to deliver your goods; the laborers, of course, also earn; the others earn because they sort the coffee beans. So it’s really employment which involves the entire community.

Does she believe that legislation, such as the proposed Bangsamoro Basic Law, or federalism, could complement such economic reform in bringing about lasting peace in her region?

“Perhaps, but even if you change government, it will still be the same people running it. So I really believe the solution to conflict lies in economic innovations. I saw this firsthand, and nobody got hurt or died because of what I did,” Elardo says.