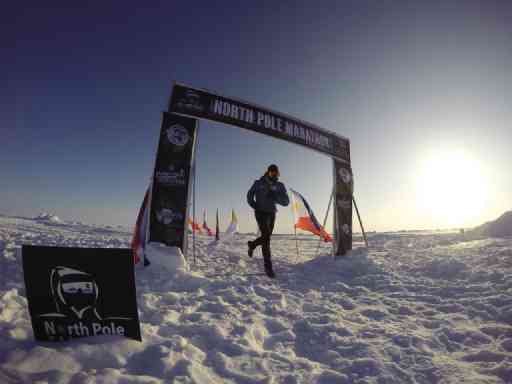 Victor Consunji crosses the finish line of the North Pole Marathon where the Philippine flag was firmly planted. Photos courtesy of Victor Consunji.

Can anyone run a marathon in the middle of an ocean? On a piece of floating and drifting ice sheet? At 90 degrees north latitude, where you can’t go any farther north and the nearest land mass is more than 700 kilometers away? Where frostbite and polar bears, not heat stroke and stray dogs, are the hazards of the competition?

The answer to all that is yes. For several days last April, a relative newcomer to endurance sports went through this adventure very few have the audacity—and the resources—to even think about.

How the 38-year-old CEO of his own firm, VConsunji Inc., made it to the North Pole in the first place is a long story. He started running two years ago to alleviate the side effects of the medication for a colon ailment. He joined races and soon graduated from one distance to another until he ran his first marathon last year in Tokyo. The cure became an addiction and two more marathons followed— in New York and Perth, Australia. When the year was over, he had run three marathons. 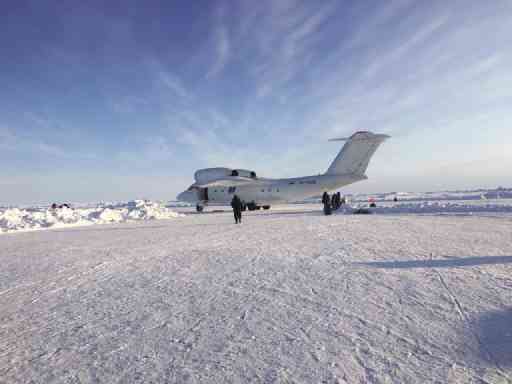 Flying to the North Pole from Svalbard is a 2-1/2 hour ride on this Russian transport jet.

While hibernating in Boston where he was taking up the Owner/President Management Program at the Harvard Business School, a classmate who had just run a marathon in the Antarctica, gave him the crazy idea of running a polar marathon. So he signed up for the one up north.

To prepare for the cold, he started training in Boston, buying all the cold weather gear he would need for temperatures as low as minus 30 degrees Celsius but not really getting in New England the kind of Arctic weather he needed for the North Pole. Resuming training back home, he rented a walk-in vodka freezer near his home in Taguig and brought in treadmill where he worked out in full Arctic gear.

Victor did not say how much he paid to enter the event, but to get into the 2017 race, one must cough up a registration fee of 13,500 euros (approximately P732,500). But for Victor, the North Pole Marathon was every bit the priceless adventure it was touted to be. To reach the North Pole, he travelled from Manila to Oslo, Norway, and flew to a town called Longyearbyen on the Svalbard archipelago, which is halfway between Oslo and the North Pole. Svalbard belongs to no country, but it is governed by Norway under the Treaty of Svalbard.

From Svalbard, the marathon runners were flown to the North Pole by a Russian Antonov transport jet that landed on Camp Barneo very close to the geographic North Pole at 90 degrees north latitude—as far north as north can be. Once a year, the Russians build the camp for tourists, scientists, marathon runners and other adventurers, air dropping road building equipment to carve out the runway for the jet to land. Landing on the slowly drifting six to 12 feet thick ice sheet that serves as an airstrip is like hitting a moving target. 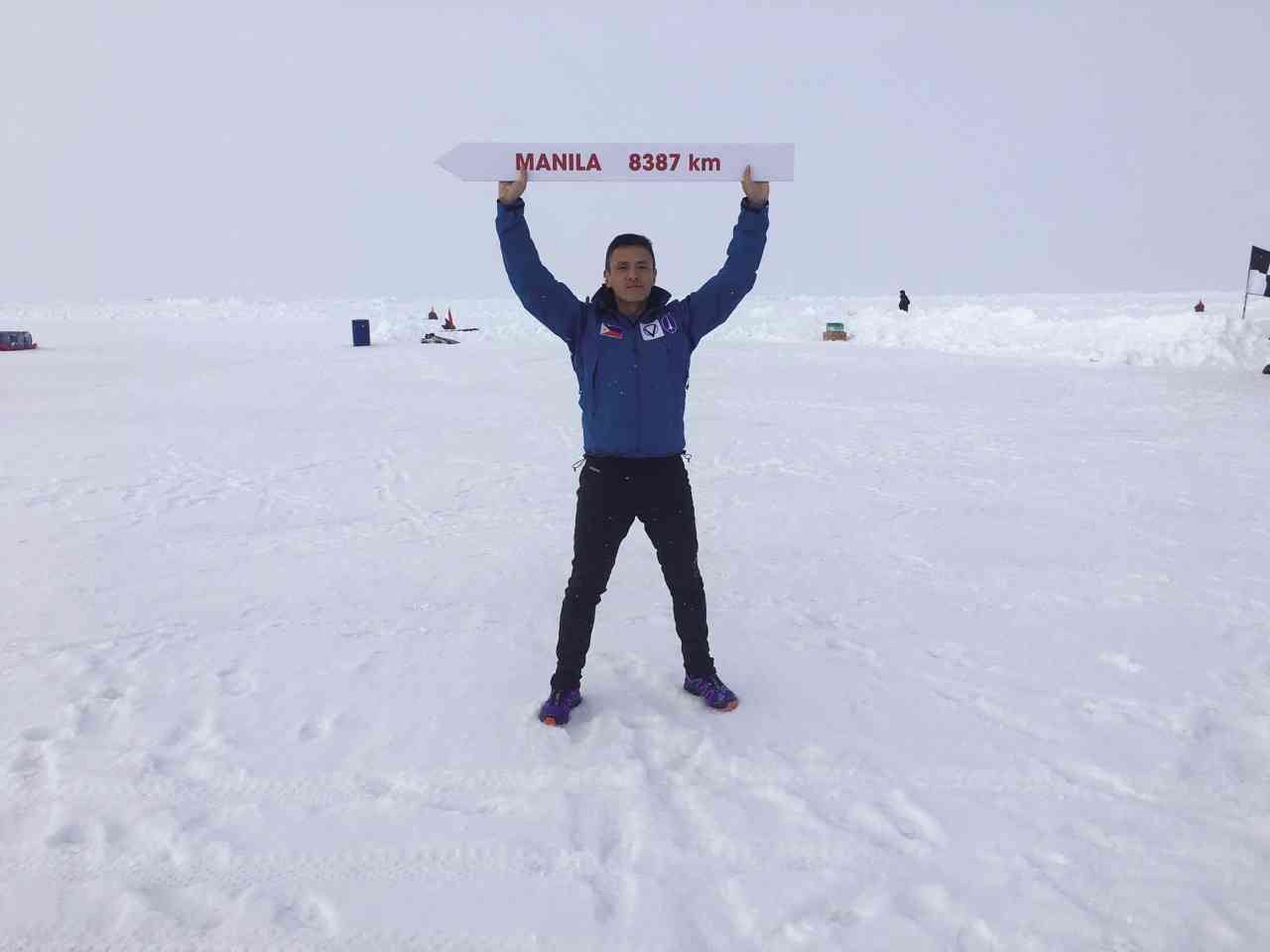 Home is a distant 8,387 kilometers from here, as the sign indicates.

This year, the runners were supposed to land on April 7, run the marathon the next day and return to Svalbard on April 9 for a maximum stay on the North Pole of 48 hours.

Stranded with nowhere to go

Victor was in the first batch of runners flown to Barneo. But after the plane took off to pick up the next batch, a big crack showed up across the runway. Frantically, the Russians cleared another stretch but again the ice cracked. Again and again they built and rebuilt the runway until the 48 hours stretched to several days. Half the marathon field was stranded in the North Pole with nowhere to go while the other half waited in Svalbard for the next available flight.

‘‘I lost count of the number of days we had to wait because the sun was always up in the North Pole this time of the year and it was hard to tell if it was day or night,” Victor said.

Being stranded on the North Pole with no way out was a scary thought, but for Victor, it was a chance to savor the North Pole. For accommodation, the runners shared a heated tent, one of the handful that made up the Barneo Ice Camp. The entry fee covered the food, which was good enough for Victor, but he had to buy everything else from the Russians. A can of Coke, for example, sold for five euros. At least it was ice cold. There was no hot shower, so they had no option but to forget grooming altogether. To urinate, one had to go to a small area where a spade is used to scoop up frozen pee onto a metal drum for proper disposal later. 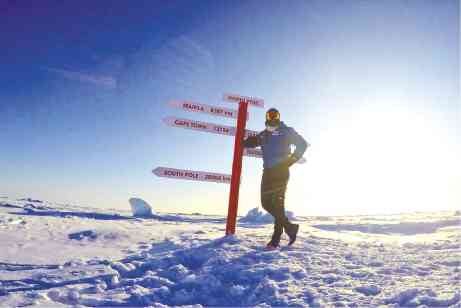 There was no proper toilet either. For ‘‘No. 2,” the Russians cut a hole in the ice, like one would a fishing hole, and you had to do it fast if you didn’t want your butt frostbitten at minus 18 degrees Celsius.

‘‘We took a lot of pictures and did some running,” he said. But they could not go very far from camp because of the twin dangers of cracking ice and roaming polar bears, which are known to have reached this far north in search of food; and they’re not vegetarian.

‘‘It was the whole North Pole experience,” he said. ‘‘We had a lot of fun and we turned out OK.” After approximately seven days, the next plane finally landed and the second batch of runners came. At last, the race finally started on April 16, a week behind schedule.

The marathon itself was almost anticlimactic … A field of 47 runners, 31 men and 16 women, finally took off on a circuit meandering through hillocks that make up the constantly changing polar terrain. The uncharted course was marked only by flags.

‘‘The first 15 kilometers was very uncomfortable,” Victor said. With four layers of clothing, it became very hot under the cold weather gear. The four layers included a base layer to wick the sweat away from the body, two insulating layers and an outer wind shell to ward off the wind chill. Around the head and neck, he wore a thermal hat, a balaclava, a buff, goggles and a face mask. He wore two pairs of socks. He was dressed like an Alpine climber.

When he got to the first aid station, he took off several layers and became more comfortable. As he unzipped his wind shell, he jettisoned icicles that used to be his sweat. Alternately, he was running on hard surface and soft powdery snow.

‘‘Along the way, I could hear ice cracking, but by then, we had gotten used to that,” he said. But it was unnerving and curious that race marshals also carried cameras and guns. He learned later that they also acted as official race photographers and that the gun was to ward off polar bears looking for dinner in the race column.

The second half of the race was a different experience. It was the most beautiful sight in the North Pole with ridges and blocks of ice making up the scenery. It was also the toughest part of the race. On knee-deep virgin snow, the runners were reduced to moving in high-knee brisk walks. Sometimes, it was like sloshing though slush.

“It was not a marathon to set personal records, but it definitely was an experience of a lifetime,” Victor said.

“I’ve been at the Pole before but this was pleasantly different in that I didn’t have to haul a sled there,” said polar explorer Sir Ranulph Fiennes in a testimonial posted on the North Pole Marathon website. “The race is a unique combination of two things I enjoy: Polar challenges and marathon running. It’s a great test of fitness and stamina.”

The North Pole, Victor was told, is beautiful when it’s not trying to kill you. But global warming is threatening to kill that beauty altogether and melt the polar ice caps into the Arctic Ocean. Victor will rue the day when it would no longer be possible to run a marathon on a giant block of floating ice called the North Pole.