’Tis the season for sharing, earning through social media 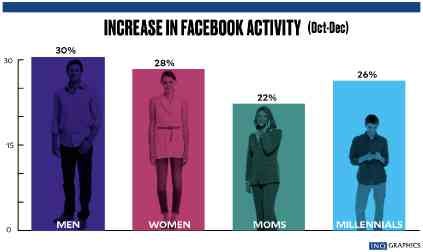 ’Tis the season to be jolly—and to post even more photos and videos on social media accounts.

Filipinos, arguably the world’s most active social media users, increase their online activity during the last quarter of the year, according to internal research done by Facebook Philippines.

During the holidays, Filipinos create more content, especially videos, compared to the rest of the year.

He said that during the festive season, the number of videos shared by Filipino Facebook users spikes by 61 percent.

He rattled off other numbers, based on a separate TNS research commissioned by the company in January.

For example, of the Filipino population using social media, 95 percent are on Facebook, equivalent to 54 million monthly active users—49 million of whom engage on mobile.

There’s more: Every day, Filipinos spend more time on Facebook than on television, print and radio.

Again, most Filipinos access the social media site on mobile, spending an average of two hours and 20 minutes on their smartphones every day.

“The world isn’t going mobile; it has already gone mobile, and the Philippines is one of the most engaged, mobile-first countries,” said Dimagiba.

While these numbers are mere trivia for regular Facebook folk, the site’s business partners could put to good use such metrics, said Dimagiba.

“[We’re] giving brands and businesses the power to share. Take advantage of the holiday season, [because] whenever you share something on Facebook, there’s always a receiver,” said Dimagiba.

Even big brands who have already come out with TV advertisements can still find good use for Facebook’s business platform.

The company’s research showed an 8-percent increase in brand reach if they complement their ads with Facebook content.

The key, said Memo Moreno, principal partner for client leadership of advertising agency Mindshare, is for brands to really understand their target consumers, such as knowing when exactly they go online.

This could present a challenge to business owners since Facebook’s data, for example, on when Filipinos go online show that they are connected almost 24/7: one in four people checks his phone the minute he wakes up, and almost half of the country’s mobile-wielding population browse again before going to sleep.

But that’s where an entrepreneur’s creativity comes in, given Facebook’s wide array of services for businesses.

“Facebook is really a platform for discovery,” he said.