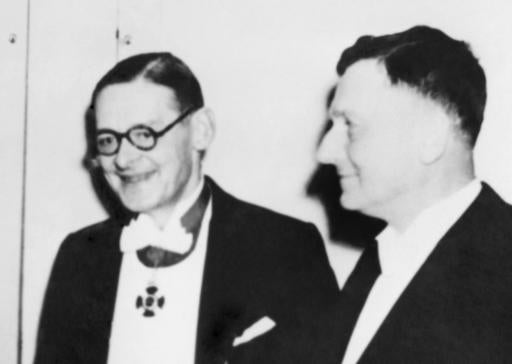 In this file photo dated December 10, 1948, Nobel Prize winners of 1948, shortly after being presented their prize inside the concert hall in Stockholm, Sweden. English writer T.S. Eliot Nobel Prize for Literature and the Swiss Scientist Paul Mueller Nobel Prize for Medicine. Mueller was honored for discovering that the powerful pesticide DDT killed flies and mosquitoes to fight Typhus and Malaria, but ended up doing both good and bad as it also poisoned wildlife. Nobel Prizes cannot be changed or revoked, so the judges must put a lot of thought into their selections, with this year’s awards due to be announced over the next two weeks. AP

STOCKHOLM — Nobel judges at the Karolinska Institute in Stockholm will announce the Nobel Prize in medicine on Monday on the heels of a scandal over a disgraced stem cell scientist that has rocked the prestigious institution.

Dr. Paolo Macchiarini, once considered a pioneer in windpipe transplants, was fired by Karolinska after being accused of falsifying his resume and misrepresenting his work. He denies wrongdoing.

Karolinska officials faced scathing criticism for how they handled the Macchiarini case, and two members of the Nobel Assembly were dismissed amid concerns that the scandal at the institute would taint the Nobel Prize.