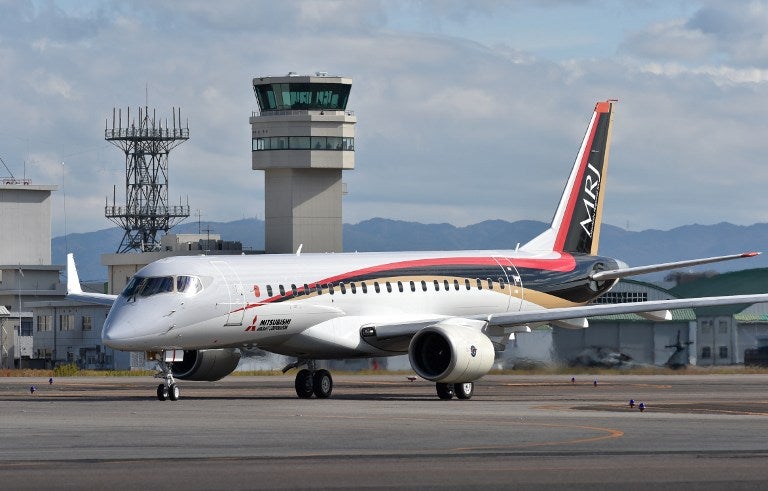 The Mitsubishi Regional Jet (MRJ) touched down at Grant County international airport in Washington state after flying from Anchorage.

The first domestically made passenger jet, which left Nagoya airport on Monday, also stopped in Japan’s northernmost Hokkaido, Russia and Alaska for fuelling.

The plane’s maker Mitsubishi Heavy said it would carry out multiple flight tests in the US to get a certificate necessary for starting commercial flights in 2018.

Mitsubishi added that about 2,500 flying hours would be needed to land the registration. It is planning three more “ferry” flights to the US, where it said it could accelerate its testing schedule.

Last month, the jet turned back twice due to air conditioning problems detected after takeoff.

The development of the MRJ, Japan’s first domestically produced passenger jet for over half a century, has suffered a series of delays.

In December Mitsubishi Heavy said it was postponing delivery of the planes by one year to the second quarter of 2018 for system software upgrades and other design changes.

The twin-engine MRJ marks a new chapter in the country’s aviation sector, which last built a commercial airliner in 1962 — the YS-11 turboprop that was discontinued about a decade later.

After being barred from developing aircraft following World War II, Japan — and its MRJ jet — is competing with other regional passenger jet manufacturers such as Brazil’s Embraer and Canada’s Bombardier.

Mitsubishi Heavy unveiled the jet — which is about 35 meters (115-feet) long and seats about 80 passengers — in October last year and has received more than 400 orders. CBB